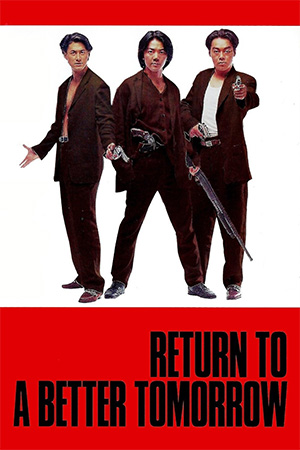 Despite the tantalising title, this flick has nothing to do with John Woo’s genre defining classics but is rather a cheap cash in from the relentless Wong Jing conveyor belt. ‘Return to a Better Tomorrow’ (RTABT) tries to emulate the themes and stylish action of Woo’s ‘A Better Tomorrow’ films but despite a couple of lively action beats and one or two decent performances it’s just a case of seen it all before and seen it done better.

Ekin Cheng is big shot triad badass Chun who has hundreds of loyal followers, a hot finance (Chingmy Yau) and seemingly all of Hong Kong at his feet. Chun plans to leave this life behind but his controlling boss has other ideas, framing Chun for some major drug smuggling. Fleeing into hiding on Mainland China with what he believes to be allies he is soon double crossed again when they attempt to take his life. Going into hiding on his own for several years, Chun waits to return to settle the score, rescue his finance who has fallen on hard times and team up with a former follower (now a big shot Triad in his own right), Lobster (Lau Ching-Wan), to take revenge.

‘RTABT’ certainly has all the right ingredients to be a slick and snazzy slice of heroic bloodshed (lots of gunplay, lots of talk of honour, lots of cool posing!) but unfortunately doesn’t quite mix into a tasty whole. While kicking off in violent style with some 90s style slo-mo action and a couple of decent gunfights, proceedings soon turn turgid as Lobster’s back-story takes precedence (crappy wife, lovable kid, he wants to rise the ranks of Chun’s posse) meaning dull drama takes over. In fact, come the third act Jing seems to throw in every type of drama he can think of in order to give the film some grit: so we get family strife, drug addiction, broken relationships, cancer and in one of the more extreme moments, child killing! Mixed with all the gunplay action and the just-can’t-help-himself bit of Wong Jing comedy/slapstick shenanigans, ‘RTABT’ is a bit of a hodgepodge of, well, everything.

Still while it doesn’t all cohere into a satisfying whole there are some entertaining bursts to be found in this low rent, mid-90s guns and gangsters tale. There is some style to the photography courtesy of Cheng Siu-Keung, Lau Ching-Wan (‘Full Alert’) gives a lively performance (though appears to be in a different film to everyone else!), likewise Collin Chou (‘Flashpoint’) is great fun as the completely deranged, platinum haired, oddly named assassin Holland Boy (and should have had more screen-time) and Jing does manage to orchestrate a couple of full blast gunfights (one in a restaurant , another in a hotel) before going into bonkers action overkill for the finale.

Not as exhilarating as it should be but entertaining in fits and starts, the genre certainly produced a lot better during this era but if one is a fan of Wong Jing’s assembly line rip offs then give it a whirl.