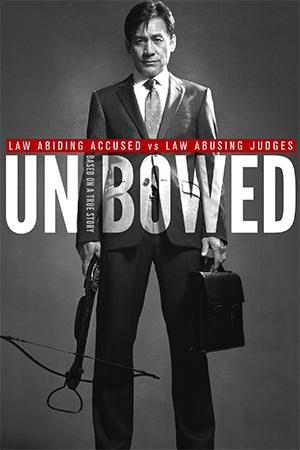 A disgraced professor threatens the judge who gave a damning verdict against him with a crossbow, an incident that hits headlines throughout Korea. The aggressor, Kim Kyung-Ho, is arrested and set to stand trial though no legal representative will take the stand on his behalf. Finally, alcoholic lawyer Park Joon – who specialises in labour disputes – agrees to take on the challenge despite having unconquered personal demons of his own to contend with.

Initially, the lawyer and client only succeed in aggravating one another with the latter using his time on remand to brush up on the law while the former finds his advice falling on deaf ears. Eventually the two stubborn characters do build a case along with much needed mutual respect. Yet despite evidence emerging that not only shows what drove Kim to his extreme actions, but also points to the crime scene being tampered with in the prosecution’s favour, the two men face intransigent judges and a legal system determined to silence them.

Based on a true story, ‘Unbowed’ is a supremely acted drama that shows Korean cinema at its very best. Granted, there are a few cinematic embellishments, a measure of artistic licence utilised to turn what could be an overly didactic feature into something a little more custom-made for the screen. There is the inclusion of the brilliant, but troubled lawyer with a tragic past that is almost a pre-requisite for these ‘little man vs. the Establishment’ motion pictures – it is of course impossible not to fall prey to some clichés along the way. Nevertheless, ‘Unbowed’ is so much more than just a regurgitation of generic conventions.

‘Unbowed’ is given extra gravitas by its inspiration, a story remarkable because of the way it stirred the press to question the Korean legal system. As the film progresses it is very easy to understand the utter frustration the lead character feels regarding his plight and the closed-mindedness of certain judges involved in the situation. Director Chung Ji-Young, returning to Korean cinema after a 14 year hiatus, doesn’t hide his political philosophy but manages to let it become an enhancement to the execution rather than turning it into a blundering polemic.

Courtroom films tend to have the dilemma of reconciling the verbose nature of law with the dramatic demands of the medium, something that often leads to clumsy theatricals. ‘Unbowed’, in keeping with the best the genre has to offer, allows the suspense and fascination connected to the case to grow organically, helped immeasurably by the outstanding performances of Ahn Sung-Ki and Park Won-Sang. Excellent films with important things to say are not especially common, but ‘Unbowed’ is one such treasured piece.