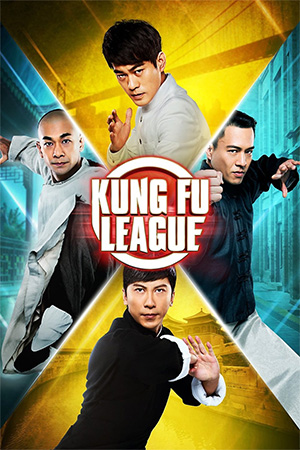 Comic book artist Fei (Ashin) humbly works in a publishing company, hoping that one day his work will reach a greater audience. While this is his long-term goal, most of his time is used pining over the adorable Bao’er who has long been a friend but has blossomed into the current ‘It Girl’. The artist feels that Bao’er is out of his league and when he is humiliated by a wealthy love rival, Fei goes into a deep depression. It is in this state that he makes a tearful plea for help from the four heroes of his comic book – kung fu legends Wong Fei-Hung (Zhao), Ip Man (To), Chen Zhen (Chan Kwok-Kwan) and Huo Yuan Jia (On). His wish is granted and four slightly befuddled kung fu heroes arrive into the confusing world of 2018, unsure of the reason for their strange jump in time.

The name Jeff Lau is associated with a certain kind of comedy. Heavily invested in Chinese (especially Cantonese) pop culture and with references that can alienate the neophyte, Lau’s broad humour can be pretty tough going for some (i.e, me). For every enjoyable comedy like ‘All For The Winner’ or ‘A Chinese Odyssey’, there’s a ‘Kung Fu Cyborg’ or ‘Just Another Pandora’s Box’, films that stretch the merest hint of a joke into an exercise in supreme tedium. ‘Kung Fu League’ displays the good and bad of Lau, a fact that means it’s never a smooth journey through the hundred minutes, but you don’t necessarily feel too aggravated by the end.

‘Kung Fu League’ starts surprisingly well. Early on, there is a ten minute scene set in Wong Fei-Hung’s Fu Shan that is arguably more engaging than the whole of recent reboot ‘The Unity of Heroes’. Recalling a measure of the Tsui Hark films, it’s almost disappointing to move on from this short section and into the main feature. Wong Fei-Hung becomes a much less interesting character when transported to the 21st century and, as he is the main focus of any action, it proves to be slightly problematic. Little is made of the usual ‘fish-out-of-water’ scenario that you might expect to be a major part of the story and things kind of stagnate thereafter.

Jeff Lau does invest ‘Kung Fu League’ with a few laughs along the way and the romance between the photogenic leads is engaging. Yet the chance to mix some first class action – which might be an expectation when Wong Fei-Hung, Ip Man, Chen Zhen and Huo Yuan Jia are in a story together – is wasted and much of the fisticuffs are pallid, ‘computer-enhanced’ confrontations that look ten years too old. Ultimately, ‘Kung Fu League’ is a muddled distraction, a film that ends up just above the relegation zone rather than setting the world alight.