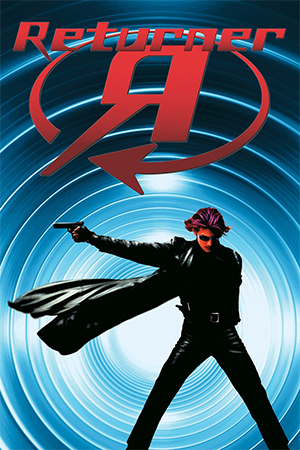 Miyamoto (Kaneshiro) is an expert gunman who witnessed the kidnapping of his best friend when he was just a child.  Since that day, he has vowed to find the man responsible and has spent his years battling through all of the underground gangs in Japan. On one fateful night, he finally encounters his nemesis but just as he is about the dish out the fatal blow a kid distracts him and his enemy escapes.  Angry and distraught, Miyamoto still manages to help the kid and then tries to send her packing but it appears she has a tale of her own.  This mysterious girl by the name of Milly (Suzuki) says she has come from the future where an alien race is on the verge of destroying humanity.  Of course, this information is a little too much for Miyamoto to take in but with Milly’s bizarre gadgetry he finds himself beginning to believe her story. Now he must decide whether to continue with his vendetta or take the fate of the whole world into his hands…

‘Returner’ is a big budget Japanese blockbuster that is definitely more about the visuals rather than any kind of meaningful narrative. What little plot it does have to offer is clearly ripped from a number of American outings and is often painfully told through the use of flashbacks. A large portion of the running time is also spent on establishing the bond between Kaneshiro and Suzuki. Unfortunately, this relationship always feels incredibly forced and it doesn’t exactly help that Kaneshiro seems to be sleepwalking his way through the movie. Anne Suzuki fairs slightly better and does at least seem to be giving it her all, but sadly she is always stuck playing the annoying kid who generally gets in the way. As for the action, it’s clearly been inspired by ‘The Matrix’ with plenty of slow motion gunplay and bullet time effects. While some of the sequences are definitely passable, the effects rarely seem up to the challenge and there’s certainly nothing here worth getting too excited about.

‘Returner’ is a bizarre blend of sci-fi and action that rarely really seems to succeed in either genre. It is also far too preoccupied with trying to imitate the American blockbuster and is at times just as empty and vapid as the worst that Hollywood has to offer.