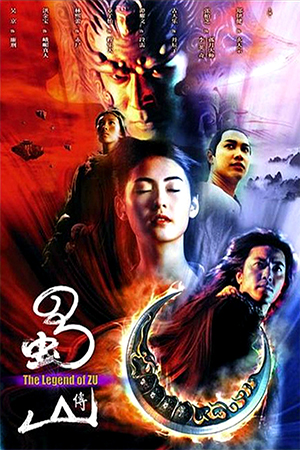 Tsui Hark’s 1983 classic ‘Zu Warriors Of The Magic Mountain’ remains a film that had an impact few could deny. Even if some critics didn’t like the actual end product, they had to admit that Hark had given the East a film that would change Hong Kong cinema forever. The innovative director gave audiences a slice of his awe-inspiring imagination and would continue to do so throughout the 80s and 90s. Now in the year 2001 and with local productions utilising CGI, it was perhaps inevitable that Tsui Hark would return to the cinematic world of Zu. Many of the visual ideas that had once been impossible were now able to be presented on celluloid. The result of this mammoth production, ‘Legend Of Zu’, is something that, while certainly not perfect, is a quite incredible visual explosion that needs to be seen.

Powerful force Insomnia has one intention: the destruction of the righteous forces that inhabit the Zu mountains. A number of heroic fighters, each with their own very special abilities, join together to battle against this superhuman foe. King Sky (Cheng) is a warrior who controls the Moon Orb he inherited from his dead teacher Dawn (Cheung) who he also held a deep love for. Though she had died 200 years previous, King Sky meets a dead ringer in the shape of Enigma (also Cheung) who is one of the chief warriors at Zu’s Omei clan. Along with her brother and the recreation of dead warrior Hollow, Enigma vows to battle Insomnia and protect Omei. However, the memories of a previous life as dawn begin to emerge in Enigma’s mind and make her ask questions about her relationship with King Sky. Meanwhile, loyal warrior Red (Koo) is asked to guard the entrance to the Blood Cave and ensure that Insomnia or his minions do not escape. Falling foul of a trick though, Red finds himself drawn to the dark side despite himself. A final battle between the forces of good and evil is created when the opposing forces begin to escape their refuge and launch a full scale attack on the Zu mountains. In the intense showdown, King Sky must face his close friend Red and the Omei allies must draw on all their strength to destroy Insomnia.

‘Legend Of Zu’ has come in for a barrage of criticism from some reviewers. Some have accused the plot of being uninvolving and uninteresting. Although it is complicated and sometimes difficult to comprehend, there is plenty of scope for audience involvement. No doubt viewers familiar with the convoluted original will not have the mental barriers up in the same way many have had. The real point is that ‘Legend Of Zu’ is a visual cornucopia and should really be appreciated on these grounds. In light of some Hong Kong films that have been critically lauded and forced many to conform to a positive viewpoint, ‘Legend Of Zu’ is the chance for this brave reviewer to speak out and say that it’s a must see. Anyone can splash CGI liberally throughout a film, but few can do it with the sheer mind-blowing imagination of Tsui Hark. Images and scenes featured here will stay long in the mind of the attentive viewer. Some of the critics’ repines do have grounds and this is not a perfect film by any means. Although the effects are quite astonishing, there is an overuse in certain scenes that leaves the viewer unnecessarily numbed. With a little more subtlety here, the overall impact would have been even greater. Zhang Ziyi is also shoe-horned into the narrative with little purpose; her popularity means an increased audience, but she is ineffectual here.

Nonetheless, ‘Legend Of Zu’ is something very special in terms of cinematic experiences. Characters may be merely functional, but the definition of each through their powers is well realised. The star-studded cast are well-used (apart from the aforementioned Zhang Ziyi) and although pretty much playing to type, are highly watchable. The real treat is the sights and sounds that engulf the viewer and absorb them into Hark’s astonishing world. Judge this definite milestone for yourself. It has its faults and no-one could call it the greatest movie ever made. Importantly though, this is a fabulous example of how a combination of technology and innovation can still wow the jaded viewer. It’s good to see Hong Kong making so many different types of productions and this deserves credit as a significant epic that demands an audience.