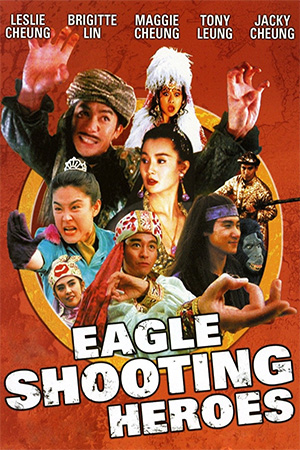 For those who found ‘Zu: Warriors of the Magic Mountain’ and ‘The Holy Flame of the Martial World’ too austere, there is ‘The Eagle Shooting Heroes’, possibly the single weirdest film to come out of the world?s most irrepressible film industry.

Drawing from the same Jin Yong source novel as ‘Ashes of Time’ (and retaining most of the cast) ‘The Eagle Shooting Heroes’ is the raging yang to Wong Kar Wai’s sober ying.  The two movies were shot concurrently through Wong’s production company and make a fascinating double bill.  Comparisons can be made, for example Leung Chiu-Wai plays the Leslie Cheung role from ‘Ashes of Time’ and Leslie Cheung takes over Leung Ka-Fai’s role from Wong Kar Wai’s film, but are ultimately futile: ‘The Eagle Shooting Heroes’ defiantly stands alone, sniggering at its own insanity.  Journeyman director Lau shoots with an efficient eye, moving Sammo Hung’s action and the general lunacy of the piece to the foreground.

Overcooked and overloaded in every department, ‘The Eagle Shooting Heroes’ will either delight wuxia pian fans eager to gawp at their idols indulging in pantomime-fu (see Cannes Best Actor recipient Leung Chiu-Wai mimicking a duck in front of a gorilla-gram!) or will have them bewilderedly slapping the disc on ebay.  Middle ground opinions are unlikely.

Not that this is a plotless melange of mugging; there is plot to spare in the two hour (over)long running time.  To barely scrape the surface, Ou Yang Feng (Leung Chiu-Wai) has plotted with his cousin (Yip) to overthrow the King and take control of the kingdom.  They aim to remove his feisty daughter, Third Princess (Lin), who is on a mission with Wang Yao Shih (Leslie Cheung) to find a martial arts scroll containing secrets that can defeat the malicious Feng.

Feng reluctantly teams with the Beggar King (Jacky Cheung, who played the same character more sombrely in ‘Ashes of Time’), who is suicidal after his amorous advances are rejected by Wang’s sweetheart (Wong).  The Beggar King wishes to be killed by Feng, whose attempts at murder frequently result in self-mutilating accidents.

Running parallel to this is pretty boy Tuan Wang Yeh’s (Leung Ka-Fai) attempts to achieve immortality.  This disparate group of misfits first meet in an inn (as in ‘Ashes of Time’ or ‘Dragon’s Gate Inn’) for an eventful night of farcical bedroom hopping, and in the climactic punch-up.

Like ‘The Matrix’ you can’t be told what ‘The Eagle Shooting Heroes’ is, you have to see it for yourself.  A mere plot synopsis omits the incidental jaw droppers: an impromptu football game with Tony Leung Ka-Fai’s disembodied head, set to a Chinese reversion of the ‘Match of the Day’ theme; Brigitte Lin running around with a costume dinosaur’s toilet, and said dinosaur kung-fuing bad guys in the climax; uneasy fun being made of Leslie Cheung’s sexuality as he nauseously rejects Leung Ka-Fai’s advances.  Or, best of all, truth centipedes that reside in the victim’s stomach and cause great pain when a small drum is beaten… Marvel at Tony Leung Chiu-Wai, Maggie Cheung and Veronica Yip’s three way drum-beating-belly-aching Mexican standoff.

Amazingly, ‘The Eagle Shooting Heroes’ about manages to have its cake and food fight with it.  The set and costume design captures the gaudy spectacle of a Bollywood epic while Hung’s pinball-fu action crackles with invention and wit; he is arguably given more room to shine here than in ‘Ashes of Time’.

The cast, bizarrely enough the finest ever gathered for a Hong Kong film, clearly relish ribbing the genre to which they were at the time wed, yet still deliver the kind of acrobatics audiences have come to expect from Hong Kong action cinema.

‘Carry on Wuxia’ it may be, but in execution and energy ‘The Eagle Shooting Heroes’ is the most polished in-joke ever made.  Or would you prefer Robert De Niro in ‘The Adventures of Rocky and Bullwinkle’?  Didn’t think so.