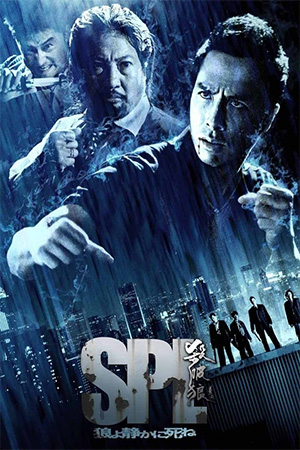 Perhaps one of the most critically acclaimed Hong Kong action films in recent years, ‘SPL’ (or ‘Kill Zone’ as it’s know in certain Western territory’s) pretty much lives up to the hype and reintroduces the heroic bloodshed genre for the 21st century. Swapping gunplay for brutal martial arts, ‘SPL’ sees a group of cops going to extraordinary lengths to put a master criminal behind bars (Hung). The four are tested to their limits and have no compunction about crossing the line between cop and criminal if it puts away the biggest crime boss in Hong Kong. Joined by transfer cop Ma (Yen), Chung (Yam) and his crew must test his loyalty all the while resorting to any means necessary to achieve their goal. Lives are put on the line and loyalties tested all leading to the emotionally charged final smack down.

While never really treading new ground, ‘SPL’ feels fresh due in part to vivid direction, a committed cast and come the final twenty minutes, some outstanding displays of martial arts action. Wilson Yip (‘Dragon Tiger Gate’) brings the Hong Kong cop thriller into the new century shooting in a neon drenched, cold blue style that manages to make Hong Kong beautiful despite all the crime and squalor taking place. The clean crisp look helps propel the film in narrative as events build and build up until the explosive finale. Characters outcomes and demises may be signposted a mile off but it’s to Wilson and the screenwriter’s credit that we still care when the inevitable occurs. No dramatic punch is lost and the predictable turns the story takes are always engaging. A great cast headed by superstar Yen doing his thing and a great bad guy role for Sammo Hung. Excellent support from Danny Sumner, Austin Wai and Lui Kai Chi as the other cops and a menacing return to film for Wu Jing (‘Invisible Target’) as Hung’s devilishly evil right hand man. But it is Simon Yam (‘Full Contact’), the real king of cool, who excels as the conflicted cop just trying to put away the bad guy before his time runs out. An underrated actor who is often brilliant in whatever he is in.

As good as the film is Yip can’t avoid slipping into unnecessary melodrama. It’s common place in any kind of heroic cop movie but the scenes of Yam and Hung ramming each other’s cars and then attempting to fight one another with golf clubs does push the limits of credibility. Ditto, Hung’s crime boss having a phone while locked up in jail so he can carry on calling his cronies. The action may be jarring for some in it’s often over the top nature compared to the gritty feeling of the rest of the film but for us action fans it is something to get excited about. Most of the martial arts is wisely saved for the last half of the film and boy is it one hell of a payoff. Two greats, Yen and Hung, going toe-to-toe is bone breakingly brutal and Yen and Jing’s fight in an alley is quite simply one of the best to come out of Hong Kong in sometime. About as good as it gets and as good as the action that was coming out of Hong Kong in the 80s and 90s.

A first class cop thriller, that despite it’s flaws and over dramatics is riveting viewing and shows Wilson Yip is one of the best directors working in Hong Kong at the minute. And kudos to the filmmakers for sticking with the ending which packs more punch than any of the fights.