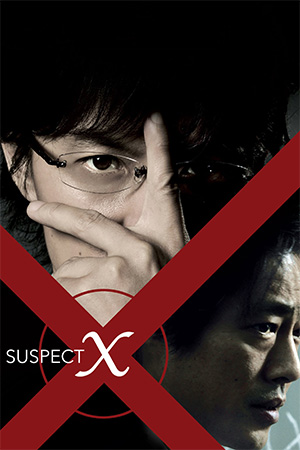 Based on the novel by Keigo Higashino and continuing on from the popular television series ‘Galileo’ also inspired by the author, ‘Suspect X’ is the first big screen outing of Japan’s latest enigmatic crime-solver Manabu Yukawa. It brushed aside big budget Hollywood hits to nestle near the top of 2008’s local box-office charts, a sure sign that it has become a cultural phenomenon in its homeland.

Single mother Yasuko Hanaoka runs a popular lunchtime eatery that is regularly frequented by socially isolated, depressed maths teacher Tetsuya Ishigami who clearly harbours deeper feelings for her. As he is also her next door neighbour, Ishigami is aware of how she is looking after her teenage daughter alone and in hiding from her abusive lout of an ex-husband. When Hanaoka’s errant partner finally tracks her down, he bullies her into giving him money and then begins intimidating her daughter, an action that causes his death when the pair retaliate. Although acting in self-defense, the mother and daughter are left catatonic by the event and have to rely on Ishigami to help conceal the body when he discovers he death. Together, the three conspire to hide the body and construct a water-right alibi for the suspects.

Under-appreciated, yet eager detective Kaoru Utusmi is assigned to the case after a mutilated body is discovered in wasteground and identified as the repulsive ex of Hanaoka, who is immediately made the number one suspect. Yet her alibi is flawless and Utusmi is stumped as to where to go with the investigation. Once again she calls on her partner’s good friend physics professor Manabu Yukawa who relishes the challenge of unravelling seemingly impossible cases. Initially Manabu – nicknamed ‘Detective Galileo’ by the police – is unmoved by the case reasoning that it has little to do with the cerebral conundrums he usually involves himself in. When he finds out that his old college friend Ishigami could be involved, the intellectual battle that awaits proves to be irresistible.

U.K. viewers will, like myself, immediately think of ‘Johanthan Creek’ with regards to ‘Suspect X’ and the prior ‘Galileo’ television series. Both characters are lateral thinking, puzzle-solving protagonists who have less interest in actual justice and more in the conquering of the seemingly impossible. Both have a certain social ineptitude that marks them as eccentric geniuses and both rely on their bewildered female colleague to bring them into the real world. While the BBC series is a more darkly humorous crime series, ‘Galileo’ and especially ‘Suspect X’ is a more straight forward proposition, though no less enjoyable because of it.

Any truly great detective story is only partly about the twists and turns of the narrative: the characterisation are what ultimately determine the dynamic. The ever wonderful ‘Columbo’ gave the killer’s identity away within the first few frames, yet the real pleasure was seeing this dishevelled hero outwit the supercilious suspects. In ‘Suspect X’  the same applies, but there are more twists within the narrative to trick those who think they’ve seen it all before. Again much enjoyment is derived from the eccentricity of its hero, yet the story is brave enough the blur the distinctions between the two sides with the audience’s emotions subtly changing throughout. The killers and the accomplice are fleshed out enough to be sympathetic and their motives not as dark as the usual genre fare. The skill of ‘Suspect X’ is that, while the viewer is drawn into this strange empathy, a twist awaits to turn pulls the rug from underneath them.

Former J-Pop star Masaharu Fukuyama is a reliably stoic Manabu Yukawa, a handsome yet unapproachable physics obsessive who distances himself from everyday minutiae.  Shinichi Tsutsumi steals his thunder in this particular story, though, as the depressed maths lecturer whose last chance of meaningful contact with the outside world is when he assists the cover-up next door. It’s difficult not to be moved by his tentative attempts at friendship even though later actions show just how obsessive he has become. ‘Suspect X’ plays with the usual hero/villain dynamic before settling into a denouement that reveals the complexity the audience was hitherto unaware of.

Although not particularly cinematic – ‘Suspect X’ is as equally at home on the small screen as the series behind it – those familiar with the characters will enjoy seeing them tackle their first big screen outing. Those of us who have not seen the television series will also find much to savour as ‘Galileo’ – our oddball hero – could quite easily join the vast pantheon of much-loved detectives with similar quirks. It therefore offers something, albeit not as substantial as it might have been, for nearly everyone.