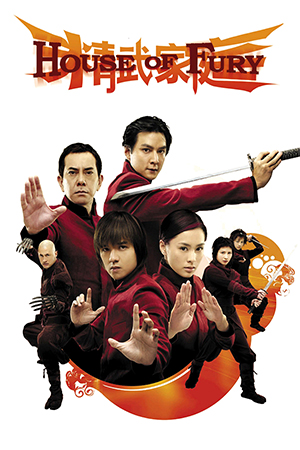 Anthony Wong stars here as widowed father Yue Siu-bo, an ex-secret agent who is now retired and alone, looking after his 2 children Nicky (Stephen Fung) and Natalie (Gillian Chung). His relationship with his children is noticeably strained as his constant stories about his illustrious former career come across more as the fanciful tales of a mid-life crisis, constantly causing them embarrassment. However, little do they know that their father’s supposed penchant for Jackanory  should actually turn out to be true, when an enemy from his past resurfaces and takes Siu-bo hostage. It is inevitably left up to the 2 teen idols to save the day, in what is essentially another popcorn blockbuster from the current crop of HK movie talent.

‘House of Fury’ is clearly a lightweight adventure, and makes no pretences at being a grand dramatic exercise. An hour and a half of over the top action, less than subtle comedy and a fair sprinkling of in-jokes and parody are what is on offer. Ultimately, it delivers on this promise.

First and foremost this is a modern day actioner, and as such, there are a number of fight scenes peppered throughout the running time. Most of these are solidly choreographed by (the now world-famous) Yuen Woo Ping, along with his less well-known associates Yuen Shun Yi and Ku Huen Chiu. The execution of their typically tight stylings is pretty good considering the cast are not stunt people of the 80’s mould. Wirework is used to enhance spins and kicks, as well as some of the more OTT moves, but otherwise the fisticuffs are grounded and realistic. In terms of comparing the action to other contemporary films, it holds up well, and anyone familiar with the current trends will know what to expect. Overall the fights are good, and sometimes impressive, but not revolutionary.

The comedy in this feature is less broad than I expected it to be from an overt HK parody. There are moments when it is truly silly (such as seeing Wu Ma flying across the rooftops or Anthony Wong’s impression of Bruce Lee complete with skeleton nunchaku) but otherwise the comedic element is restrained, taking a backseat to the fast moving, but simple plot.

Away from the action and comedy elements, almost all of the cast still perform well. “Almost” being the operative word here. As in 99% of his roles Michael Wong has yet again managed to confuse me. I am confused because I just do not understand why he is ever cast in any film. Here, he is typically stilted with his dialogue, and has no action to perform at all. He speaks English, even when being spoken to in Chinese, and no-one has a problem understanding him at all?! Anyone could have played his role in this film, and I fail to believe that anyone could do a worse job.

Aside from the usual Michael Wong grumbles, ‘House of Fury’ does an excellent job of distracting you for 100 minutes. It doesn’t rank up there with the best of any genre but for a lightweight action-comedy it is worth a watch. After his full directorial debut with ‘Enter the Phoenix’, Stephen Fung has shown a lot of promise and I’m surprisingly looking forward to his next attempt behind the camera.