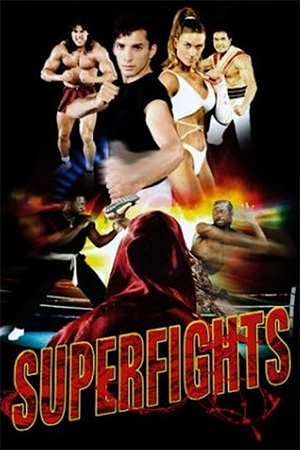 Seasonal films, headed by Ng See Yuen, had been producing martial arts films for years in Hong Kong, making such hits as ‘Snake in the Eagle’s Shadow’ and ‘Drunken Master’, before branching out in the States for a brief stint in the 1990s, most memorably with the ‘No Retreat, No Surrender’ series. Now it’s fairly safe to say, Seasonal’s American pictures featured a good amount of cheese, even by most action movie standards. Well ‘Superfights’ pushes this cheese element into the stratosphere with huge amounts of overacting, alarming costumes and quite possibly the most enthusiastic, All-American performance ever seen on screen from Brandon Gaines. His Jack Cody is so clean cut, gung ho and patriotic he probably makes most gung ho Americans cringe. He loves Superfights, a fictional WWE/UFC type fighting match that when he gets to be a fighter himself he just can’t, gosh, believe it. However, double dealings, corruption and drugs soon rear their heads and Cody finds himself fighting for his life outside the ring as well as in it.

Brandon Gaines, making his only feature film appearance, certainly has the energy, enthusiasm and fighting skill. Plucked from nowhere to be the ‘All-American Hero’ he has so much energy it almost burns through the screen. Vitali, who was also in Seasonal’s ‘No Retreat, No Surrender 3’, plays the slimy bad guy and while he doesn’t always get his lines right his superior kicking skills make up for any lapse in acting. Loads of real life fighters pop up including Rob Van Dam, Cliff Lenderman, Kelly Gallant, Jim Steele and the always quality Chuck Jeffreys. Even hardened fights fans will find it difficult not to crack a smile or two at the hilarious dialogue and continuous gurning. Again, like they did in much of their Western produced films, Seasonal utilizes a mostly Asian film crew including director Tony Leung Siu Hung (‘Drunken Master 2’) meaning ‘Superfights’ seems to be an Asian approximation of American culture: hence the overt gung ho-ness and amped up cheesiness.

Still the film is cram packed with Hong Kong style fight scenes with the western cast performing most of their own fights. There is a surfeit of cool training sequences for the fight fan to enjoy including some ridiculous hi-tech (well, hi-tech for 1995) training equipment that Gaines must master. The end multi fight and dust up between Vitali and Gaines is as good as anything in a Hong Kong action film and features some hard hitting boot work and high impact action. Gaines is a very gifted fighter and despite his over the top performance it’s a shame he didn’t make any more fight flicks.

Probably the hardest to find of Seasonal’s American produced pictures, ‘Superfights’ is great fun despite the super cheese factor and worth seeing for the awesome martial arts.