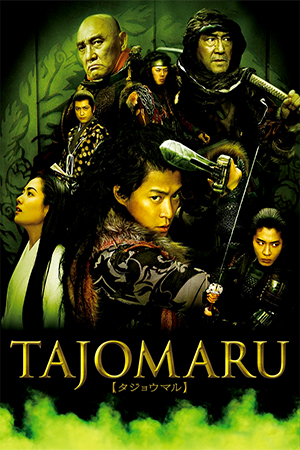 If you like a lot of shouting in your Samurai movies and not much else then you’ll dig ‘Tajomaru’. Otherwise, if you don’t, there is not much else to enjoy in this drawn out melodramatic shout fest. A quartet of youngsters (2 brothers, a girl, and a wayward stray the brothers adopt into their family) fall out, connive against one another, and are ultimately reunited in this laborious tale of power struggles and samurai backstabbing. One of the brothers also manages to turn himself into the famous wandering bandit Tajomaru (legend having it that each bandit who has been given the name Tajomaru passes it onto another bandit, worthy of the name, on their dying breath) who then commands a rag-tag group of bandits and sets about setting everything right: despite the fact he has shown no fighting or leadership prowess before this point. He also, along with the rest of the cast, does very little fighting or much of anything else as one scene of lengthy exposition after another clogs up the two-hour (ugh!) running time.

This is certainly a good looking film and the young cast try their best but are hampered with a narrative that has scenes just go on and on explaining everything ad infinitum. This steals the film of any pace or tension meaning the viewer becomes less and less interested in the plight of the antagonists and, quite simply, wishes everyone would just shut up for a couple of minutes. What should have been a gripping tale full of intrigue and suspense is instead just one long slog through tired monologue after tired monologue. It doesn’t help matters either, that the filmmakers insist on playing what sound like pop songs on the soundtrack, which ruins any chance of the film being taken seriously. I know this a modern film, no doubt aimed at a younger audience, but when your movie deals with such serious subject matters as rape, cold-blooded killing and something called The Pit of Hell (not as cool as it sounds!) don’t then throw in cheesy pop songs to try and lighten the tone.

The narrative keeps feeling likes it’s going to build to something, like events will finally kick off, but instead it just stagnates into another drawn out scene of shouting and explaining and shouting. There is very little fight action and by the time you do reach the end of the epic two hour running time, chances are you won’t care what is happening to whom and why. Tajomaru’s band of plucky bandits are fun but are used too little and it would have been a lot more entertaining if proceedings had focused on them instead. Disappointing.