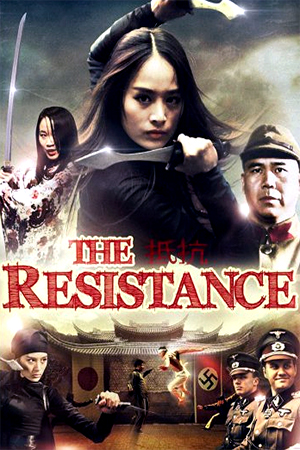 It’s 1937 and the Japanese have begun their invasion of China leading to thousands of people being slain in Nanking. Meanwhile a masked vigilante by name of The Black Dress Killer is retaliating by killing Japanese soldiers (usually beheading them with a samurai sword) making his way up the ranks towards an evil Japanese general. The general and his troops, who are also holding Chinese men hostage and forcing them to brawl in bloody fight tournaments, begin a hunt for The Black Dress Killer who may not in fact be a man but a woman villager hell-bent on killing the general who murdered her family years ago.

In fact, it’s blatantly obvious it’s the women and main actress, Hu Zang, from the get go as ‘The Resistance’ holds few surprises in its haphazard story that can’t decide whether it’s a serious drama or a schlocky martial arts caper. Well, it’s a bit of both really and is much better at the schlocky martial arts  than it is at the serious drama. While director Zhang Li Peng has good intentions of telling a serious story set during a violent time in China’s history the choppy storytelling techniques and sometimes amateur nature of the acting mean ‘The Resistance’ can’t escape its B-movie trappings. While the flick is nicely shot and makes good use of locations the uneven editing and pacing means it’s often hard to engage with what’s going on. Scenes often start and stop almost immediately and, for the first half at least, flit from one to the other with little rhyme or reason. Plus there is also a subplot about an American journalist who gets caught up in all Japanese solider slaying that never takes off and feels awkward and out of place.

However, if you can leave your pretensions behind and accept ‘The Resistance’ for the B-movie that it is, it’s actually a fairly enjoyable low rent romp. There is plenty of blood and severed heads flying around (usually of the dodgy CGI variety!), it all moves at a fair clip and come the last fifteen minutes or so Zhang Li Peng caps everything off with a surfeit of martial arts action. It’s not bad either, nicely choreographed with the fights pleasingly acrobatic (though the director does have a frustrating tendency to cut just when the fights are getting good!) and once it starts it’s fight after fight (there is even some cool ninja fighting action!). If it had just embraced its B-movie roots a little more and forgone all the melodramatic seriousness ‘The Resistance’ could have been an A class B-movie.

As it stands it’s some unpretentious trashy action entertainment that won’t do much for those looking for a serious account of the Nanking massacre but should entertain B-movie fans.