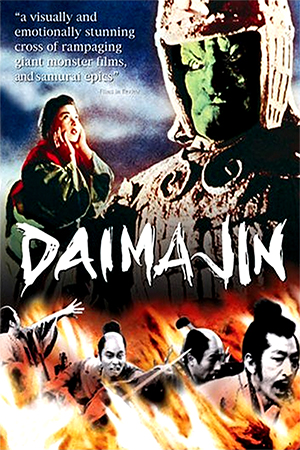 A Japanese monster movie with a samurai twist, ‘Daimajin’ from 1966 is a slowburn film that is part period drama and part giant stone man Kaiju extravaganza. Not as famous as its more scaly brothers, what it lacks in notoriety it makes up for in sheer suss in what makes a good film.

In seventeenth century Japan, a poor, dirt trodden peasant village is feeling the cruel hand of Samanosuke, a petty warlord and his band of hired swords. Samanosuke wants the land bad, even if he has to carve up all the poor sods that currently reside there. Fortunately for the villagers there is someone looking down on them, a stone idol on a mountain known as Daimajin. The villagers tell Samanosuke to hit the road if he doesn’t want Daimajin on his arse. The warlord of course guffaws on, carrying on his pillaging and killing, until the villagers wear out their knees with all their praying and someone on the mountain starts to stir…

It sounds like pretty standard stuff but ‘Daimajin’ really is a product of its time, the period setting and story are not that far removed from the worlds of the chanbara films that to me hit their gritty peek in this era of Japanese film, the grace of the fifties met the excess of the seventies in the middle. To any not familiar with the reference imagine a John Ford or a Leone western that just happens to have a big monster in it. Instead of the cavalry coming around the bend, it’s a big stone man.

More a force of nature, Daimajin does not really distinguish between those that have summoned him and those that need squashed, he seems happy to squash anyone in his path. Samanosuke might break out catapults to try and vanquish Daimajin but the monster just rumbles on. The end is as good as anything else in a good Godzilla movie. Watch those palaces fall!

Some might not be happy with the film’s slow pace and general bleak tone but as Kaiju disappeared up a silver spacesuited alien’s behind, ‘Daimajin’ and the two lesser movies that followed left a trilogy of Kaiju movies just at home at the art house as Kurosawa.