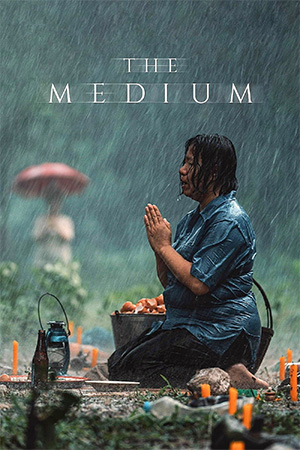 In the Isan region of Thailand, Nim (Utoomma) is a practicing shaman believing she embodies the spirit of Ba Yan. A known healer in the region she is somewhat at odds with her sister Noi (Yankittikan) who was supposed to inherit the spirit of Ba Yan but refused, thus it passed to Nim. When the death of a known local rocks the community it appears the spirit of Ba Yan will now pass to Noi’s daughter and Nim’s niece, Mink (Gulmongkolpech). However, what passes to Mink seems to be an entirely different and potently evil spirit that transforms Mink into the embodiment of cruelty and plunges her family into a realm of darkness as they desperately try to free her from possession.

Directed by Banjong Pisanthanakun who helmed the genre defining ‘Shutter’ and co-written and produced by Na Hong-Jin (of ‘The Chaser’, ‘The Yellow Sea’ and the similar themed ‘The Wailing’), ‘The Medium’ has some incredible pedigree, and it shows. Slow burn, tightly wound and ultimately shocking ‘The Medium’ is a dark dive into spiritualism and possession. Framed as a faux documentary, with a crew initially filming Nim about her life as a shaman, the film starts off found footage style before morphing into something much darker and more complex. Never too shaky of camera or in your face, the documentary style is a little more subtle (though can never fully get away from the “what are they still filming” notion that curses such films!) giving a naturalistic quality to proceedings. The first hour is all slow burn and unfurling unease as the family tensions soon give way to something more sinister when Mink begins to exhibit unnerving qualities.

Once it’s clear that Mink is in the grip of something very evil, the second half switches gear and unleashes a torrent of possession-based atrocities as the crew try to capture every unholy (and inhuman) act Mink displays. Subtlety is perhaps jettisoned in favour of shock but it’s a natural escalation as events descend into chaos. An extended sequence where the crew set up night vision cameras in and around the family’s property is particularly effective as it captures the creepy cruelty of Mink’s unsavoury antics. The finale then descends into all out darkness as an elaborate ceremony to exercise Mink’s demons goes spectacularly south. Pisanthanakun, and the other writers, don’t hold back as chaos and depravity grips all in an impressively staged decent into darkness.

At the heart of it all, is a family being torn apart as their faith is put into question and their actions and rejection of said faith years earlier comes back to, literally, haunt them. While the second half of ‘The Medium’ certainly pays off in terms of horror and shocking sequences it never sacrifices character and the plight of faith the character’s are experiencing, meaning the film doesn’t devolve into just cheap shocks. ‘The Medium’, wisely, takes it time to get to the all-out horror building impressive tension and unease and the cast of mainly unknowns are fantastic and entirely committed, selling their plight with conviction. Not least Narilya Gulmongkolpech as Mink, who gives a searingly brave portrayal of a young woman losing her identity as she transforms into something evil.

While the faux documentary/found footage angle threatens to buckle proceedings on occasion (the aforementioned “why are the still filming aspect” and the film would have worked just as well filmed in a more traditional/linear way), ‘The Medium’ is nevertheless an impressive and brutally nihilistic delve into the dark side of spirituality. It’s not a happy film, but ‘The Medium’ is a well-crafted and rewarding experience that manages a fine balance between subtle dread and all out horror.