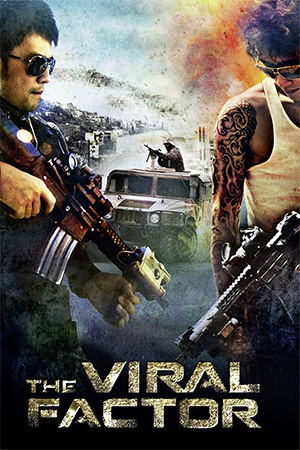 ‘The Viral Factor’ cements Dante Lam as one of the modern kings of Hong Kong action cinema in a slick tale of biological weapons, long lost brothers and huge gunfights that crams in enough plot strands for several films. Jon (Chou) is part of an elite unit in charge of escorting a criminal scientist to safety when he wants to turn over the deadly new virus he has created to the authorities. No sooner have they set off in their armoured Humvee patrol they are ambushed, the scientist is snatched, Jon’s partner Sean (On) betrays him, leaving another member dead and a bullet lodged in Jon’s head. After recuperating but now suffering from severe headaches, Jon spends some time looking after his sick mother who reveals Jon in fact has a long lost brother Yeung (Tse) who is living with their estranged father.  Jon then sets out to find Yeung only to discover he is a lowly criminal who has been tasked with kidnapping, by some corrupt cops who work for Sean, a renowned scientist Rachel (Lin) who will help them crack the previous scientist’s (now dead!) bio-weapon so then they can sell the antidote and make a ton of money. Jon just happens to meet Rachel on a flight prior to being snatched and soon the three are up to their necks in gunfire, double crosses and daring chases, as they hope to stop Sean unleashing the virus.

Phew! There is a lot going on in ‘The Viral Factor’ and a lot of it does depends on coincidence and suspension of disbelief on several occasions but none of this stops it from being a genuinely exhilarating thrill ride staged on a grand scale. A sort of drama about a family being reunited, albeit with deadly viruses threatening to kill everyone and large action scenes, Lam certainly throws a lot in and the tone does vary but thanks to the confident staging and the unrelenting momentum it all works for the most part. While there are moments of downtime, as the brothers come to trust and learn about one another, the film is essentially one long race against time to stop the virus being unleashed and save several characters who find themselves in jeopardy. The reuniting of two estranged brothers, who have taken very different paths in their lives, may be a strange way to frame a gigantic bio-weapon unleashing action film around but it certainly gives the film a unique hook and thankfully the melodrama is toned down meaning there are actually some tender and emotional scenes in amongst the ever mounting carnage.

However, action is the name of the game here and Lam mounts blockbuster set-pieces with such verve and energy he gives Hollywood directors a run for their money. From the tense Humvee attack come shootout that opens the film (and which almost tops the similar sequence in ‘Clear and Present Danger’: almost!) to playing hide and seek with helicopters (real helicopters at that: not CGI ones!) in amongst the skyscrapers of Kuala Lumpur, to the incredible and frenetic gun battles of the finale, ‘The Viral Factor’ is an action feast. While unfortunately obvious CGI does rear its ugly head on more than one occasion (there is just no getting away from it these days) the action is primarily impressively staged stunt work and fire fights. Lam must be commended for staging sequences that actually last longer than a minute in several sustained set-pieces that play out tensely and creatively increasing in velocity and peril as the action gets bigger and bigger: almost reaching James Bond level of action craziness in several instances.

While the constant switching between Cantonese, Mandarin and English (and even several other languages at one point!) and the fact the two leads seem indestructible no matter what they go through (seriously Nicholas Tse must be surviving purely on adrenaline considering what his character goes through) may irk some (and it could have been a good 10 minutes shorter), ‘The Viral Factor’ is nevertheless a blockbusting Hong Kong actioner done right that surges from one ingenious set-piece to the next (and doesn’t skimp on the brutality either as this is one hard edged action film despite the slick gloss). While Lam may have done better films (‘The Beast Stalker’, ‘The Stool Pigeon’) he’s certainly more than adept at delivering blockbuster thrills.