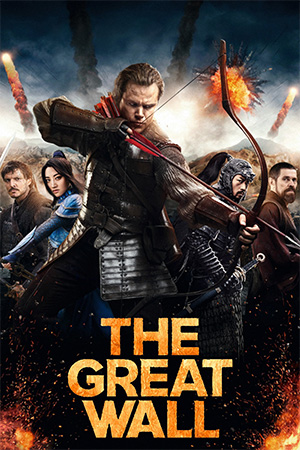 ‘The Great Wall’ is a big fat monster movie and makes no bones about being anything else. Was it intended to be more than just a showcase for visual opulence and gigantic action? Not sure but it certainly has both of those in spades. Will it irk fans of director Zhang Yimou expecting another fusion of martial arts and serious drama he did so well with the likes of ‘Hero’ and ‘House of Flying Daggers’? Probably. Will it irk fans of the director who love his earlier, gentler work such as ‘Raise the Red Lantern’ and the wonderful ‘The Road Home’? Definitely. Yet for a critically acclaimed director who has now gone full on international blockbuster, Yimou goes all out with the high concept and his considerable budget and delivers an over-the-top thrill ride.

The films opens with some scroll informing the viewer the Great Wall of China has many legends and that the one we are about to see is just one of them. This particular (presumably fabricated!) legend sees the Great Wall, many moons ago, come under attack from a relentless swarm of dragon like, possibly alien, creatures who are determined to break through and conquer the rest of the lands. General Shao (Zhang Hanyu), Commander Lin Mae (Jing Tian) and their chief strategist (Andy Lau), along with their massive army, are doing their damnedest to stop the creatures when two European mercenaries (Damon and Pascal), out fighting and wandering across China, fall into their care. Despite initially wanting to high-tail it as quickly as he can, Damon’s noble warrior side reveals itself and joining forces with Line Mae vows to stop the marauding creatures before the wall fails to hold them back any longer.

While there has been much consternation with Matt Damon showing up to save the day, and yeah he does get one too many “hero moments”, his involvement isn’t nearly as bad as the internet may lead you to believe. Damon is as solid and as committed as you would expect (though is accent is all over the place!), he shares good chemistry with Pedro Pascal and, to be honest, the film is all but stolen by the wonderful Jing Tian. At the forefront of the action, she is tough, intelligent and likeable and (to this reviewer at least) the real star of the flick. The other star is Yimou’s fine cinematic craftsmanship. Sure he might be skipping on deep characterisation but he sure excels in visual splendour and some incredible action design.

The film is a visual delight and Yimou certainly doesn’t skimp on the monster action. Big, bold, creative and utilising some impressive CGI, ‘The Great Wall’ packs in a monster amount of large scale action as Damon, Tian et al take on the horde of monsters in ever increasingly elaborate ways. The wall itself is used imaginatively to help repel the monsters and some of the sequences Yimou creates are thrillingly executed, refreshingly sustained and mercifully coherent. Sweeping camerawork and restrained editing means one can always see and appreciate what is happening in the action scenes despite the onslaught of frenetic CGI monsters. While he can do drama and restraint well, Yimou is no slouch in the action and spectacle department either.

As touched upon earlier, character interaction and depth is somewhat lacking as the film rockets from one monster attack to the next and the “banter” between Damon and Pascal is often more cringe inducing than chuckle eliciting but overall ‘The Great Wall’ is exactly what it should be: a great big fun monster movie. Its commitment to uncomplicated monster fun and well staged spectacle is a breath of fresh air and if one can leave overly critical urges and pre-judgment based on the trailers aside, then one is in for a monster good time.