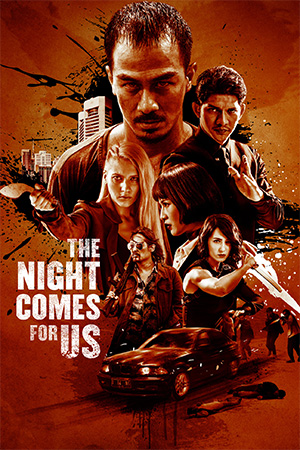 Various alums of ‘The Raid’ films and ‘Headshot’ reunite for another bout of insanely violent action spectacle in the viciously mounted ‘The Night Comes for Us’. Utilising many of the cast and crew of the aforementioned films, director Timo Tjahjanto ups the stakes and delivers an action stuffed, bloody crime saga that tops his previous action stuffed, bloody crime saga ‘Headshot’. In order to maintain tight control over the golden triangle and all the drug based riches it brings, the Triad utilise an elite squad of enforcers called the Six Seas. Ruthless and with little patience for mercy this group of six deadly warriors keep control by administrating bloody reprisal. When one of the Six Seas, Ito (Taslim), sees a way out of this brutal life and a shot at redemption (by snatching and rescuing a young witness to one of the crew’s massacres), he takes it. And with it comes an onslaught of ferocious retaliation as his bosses, his former Six Seas colleagues and his old friend Arian (Uwais) all come gunning for him.

While one may have seen this type of story (former enforcer/assassin trying to leave his criminal life behind) many times before in the action arena, it’s doubtful it’s been mounted with such vicious verve and audaciously bloody action. Tjahjanto lets all his bloody action soaked urges off the leash to deliver an unrelenting barrage of excessively violent action set-pieces. Coupled with searing tension (that rarely fades over the two hour run time), a subtly moody score and a gothic drenched vibe, ‘The Night Comes for Us’ is a violent, edgy graphic novel brought to life. Framing the narrative as if it is at the apex of a long running crime saga, we the viewer join the story as it all implodes for the various bad guys and their factions: their lives of crime, violence and drug running finally catching up to them. Thus the tale explodes in a long running battle across the city as Ito frantically tries to stay alive and get his young charge to safety.

The action borders on the sublime and rarely lets up once Ito decides to make a run for it. Choreography is top notch and incorporates everything from gunplay, to knife fights, to several blistering one-on-one confrontations. The action certainly lives up to the hype that is being thrown its way and is coated with a brutal bloody sheen. If one is familiar with Tjahjanto’s other work (‘Killers’, his segments for ‘The ABCs of Death’ & ‘VHS 2’, ‘Headshot’) then one will know this is a filmmaker who does not shy away from dismemberment, torn limbs and bloody slashings. In fact, one could argue that the blood and gore is so copious it almost gets in the way of the action. With the need to top the previous way an assailant is slain (and presumably keep the gore-hounds slack jawed in amazement) the gore almost trips into ‘Saw’ like insanity. However, thanks to the likes of its leads and Tjahjanto’s assured hand (this is definitely a violent crime film rather than a horror) the set-pieces are still delivered with breathtaking creativity.

Uwais continues to impress and build on his star quality despite taking somewhat of a back seat here. He’s still a vital character but it’s refreshing to see him play a more dubious sort rather than the hero. Plus, the sight of him drenched in blood and screaming come the finale is, well, quite the sight. However, this is Joe Taslim’s film and he owns it. Cutting though the picture, and a never ending barrage of goons, with steely determination and bulldozing adrenaline he’s the drive of the film. Shout-outs also to Abiamna Aryasatya and Zack Lee as various members of Ito and Arian’s former crew who make an impression and dive into the action bloody fist first, and Julie Estelle of ‘The Raid 2’ also makes a splash as a deadly assassin who gets a couple of standout fight scenes.

As ever not everything holds together in this heightened world of violent gangsters. The action may be a bit repetitive for some (not this lowly reviewer) and proceedings may feel just a bit too ‘The Raid’ and ‘Headshot’ like, though (again, at least to this lowly reviewer) this is Tjahjanto utilising all his skill and honing his style to deliver his best film yet. In addition, after two hours of glorious action spectacle and tension soaked chaos, proceedings come to perhaps too abrupt of an end.

Still, minor niggles for what is a dark action tour de force. If one is not a fan of bloody carnage, one may want to stay clear but for fans of full throttle Indonesian action then ‘The Night Comes for Us’ should surely sate the most ardent fan.