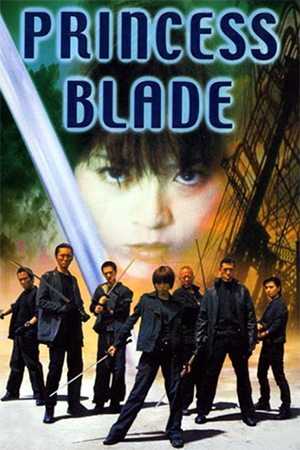 An unknown country is quarantined off from the rest of the world and finds itself ruled over by a tough dictatorship who employ a sect of assassins known as the Takemikazuchi to keep the peace.  Amongst their number is a young girl by the name of Yuki (Shaku), whose family were the founding members of the clan.  As her 20th birthday approaches, Yuki is suddenly faced with the awful truth that her mother was murdered by the current leader who calls himself Byakurai (Shimada).  Opting to immediately seek revenge, Yuki finds herself outmanoeuvred and out-manned so she is forced to flee for her life.  On the run, she comes across a young man by the name of Takeshi who treats her injuries and shows her that life is not all doom and gloom.  However, Yuki is now faced with the dilemma of pursuing her new, and decidedly happier lifestyle or facing her past and exacting the revenge she craves.

‘The Princess Blade’ is a re-imagining of the ‘Lady Snowblood’ manga that relocates the action into a futuristic setting. Unfortunately, the post-apocalyptic vision of the future with marauding teen gangs has been done to death by now, and ‘The Princess Blade’ certainly doesn’t use it particularly well. The main problem is the lack of a significant story, as the film seems to play all of its cards early on and we’re left meandering around as the main character contemplates how to deal with her predicament. This ultimately means that the film becomes somewhat dull in places and you’ll regularly find yourself looking at your watch, just praying for something meaningful to occur. However, the performance of leading lady Yumiko Shaku does go some way to rectifying this. Although she doesn’t exactly have a great deal to work with, she certainly injects a fair bit of heart into her performance and she is definitely the most watchable element of the entire piece.

The real ace in the hole for ‘The Princess Blade’ is undoubtedly the inclusion of Donnie Yen as action choreographer. All of the fight scenes definitely sport his trademark techniques, with plenty of lightning fast swordplay and quite a few of his signature kicks. It’s also interesting to note that, for some reason, either Donnie or the director has opted not to overdo the use of undercranking which actually makes the fights more exciting than a lot of Donnie’s solo efforts. The one disappointment however, is that there just aren’t all that many fights included.  We only really get one fight at the beginning and one at the end, leaving the viewer ultimately feeling somewhat unfulfilled.

‘The Princess Blade’ is a very average affair that is lifted by some standout moments of action and a strong leading performance from Yumiko Shaku.  Perhaps if a sequel is made (and the disappointing conclusion that leaves an open end would seem to hint at the possibility) then the producers could take more time over the story and combine all of the elements to create one heck of a film.