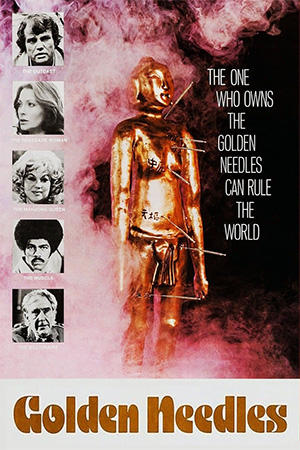 A legendary statue creates interest around the Hong Kong underworld though the object itself is not the item that people are willing to kill for; stuck into the statue are a set of acupuncture needles that, when applied in the mysterious configuration shown on it, can bring youth and dizzying pleasure. Commissioned with the task of getting it by her flamboyant American boss (entertainingly played by Burgess Meredith), visitor Felicity hires local thug for hire and fellow countryman Dan for the job. But with an object as sought after as this, there are inevitably double-crosses and hidden agendas among the competing parties and Dan soon regrets getting involved in the quest.

‘Golden Needles’ was one of the first films made after Robert Clouse’s success with ‘Enter the Dragon’, and after trying blaxploitation with ‘Black Belt Jones’ with middling results, it’s not a surprise that the director returned to Hong Kong. Of course the exotic location of ‘Enter the Dragon’ was a very small part of its success with a certain force of nature known as Bruce Lee being what really made it famous. It’s clear, that Clouse thought he could capture lightning in a bottle again, but without Bruce Lee, that would be impossible.

With this in mind, ‘Golden Needles’ isn’t without entertainment value. The action is of the flailing arms variety rather than the more stylised choreography that had caught the imagination the year before, yet it is at least serviceable. The sight of Hong Kong in the 70s – filmed from a Western perspective – is watchable too and means that ‘Golden Needles’ has a certain charm. The main selling point of the film, however, is that Texan tornado, the gruff and effortlessly cool Joe Don Baker who comes across like an American ‘Yojimbo’ with his detached manner. Baker is always a great presence in films and, the year before, had been particularly great in the superb ‘Charley Varrick’. Here, he plays the reluctant hero thrown into a world he doesn’t understand and there is a certain Jack Burton-style bewilderment in his progress through the film. Ultimately, it is Joe Don Baker that makes ‘Golden Needles’ worth tracking down; it’s by no means his best work, but he’s always great to watch.