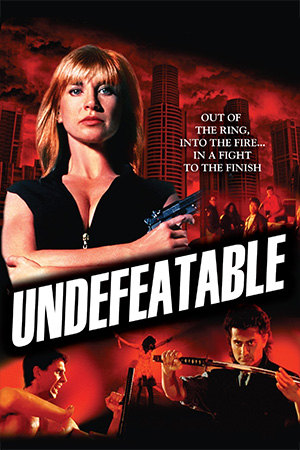 The once unstoppable movie machine that was Godfrey Ho (he of a trillion cheap jack martial arts films, usually with the word Ninja in the title) teamed up with 90s kung fu starlet Cynthia Rothrock for a couple of, well, cheap jack action films including the quite (unintentionally) hilarious but surprisingly watchable ‘Undefeatable’. Not only does this movie feature many a martial arts scrap (some of them quite good), unbelievably cheesy acting and logic defying scenarios it also has one of the barmiest plots to ever grace a kung fu flick. And that’s saying something for a Godfrey Ho film.

Non-acting entity Don Niam plays the hilariously monikered Stingray who just happens to be a martial arts champion. In fact, he’s so good he’s gone over the edge, obliterating his opponents and taking the violence home with him to take out on his wife. When said wife has been abused one two many times and leaves, Stingray flips and goes on a killing spree: kidnapping, abusing and killing any woman that resembles his disappeared wife (it must be noted that none of the women he kidnaps bare any actual resemblance to his wife save for a badly fitted wig). So, how does Rothrock get involved in all this silliness? Well, after much absurdity and a few scraps fighting streets gangs, she ends up helping a cop (also non-acting entity, John Miller) track down Stingray and, wouldn’t you know it, her sister looks just like Stingray’s wife and inevitably ends up getting kidnapped by him, leading the to some obligatory over-the-top fighting.

This flick is just as bonkers as it sounds and seems to switch from some sort of slasher type flick to a martial arts flick and then back again at regular and random intervals. One thing is for sure, it’s always unintentionally hilarious. Rothrock ain’t bad and acts everyone off the screen but everyone and everything else is played so straight and delivered with such woodenness, it’s just plain funny instead of scary, tense, or thrilling. Stingray is one of the most hilarious villains ever (despite the fact he is actually doing some pretty horrific things) constantly bugged eyed, grunting and at one particularly barmy moment, spraying red stripes through his hair (which is also possibly the most epic mullet ever!) to look more scary. Bless you Godfrey Ho.

But, to be honest, this all makes the flick kinda fun. There is a kinda nostalgic feeling to the film, as flicks likes these were a dime-a-dozen in the kung fu crazy 80s and 90s and to be fair most of the action and fights are pretty well done. Well, maybe not the bit when Rothrock fights some campy dude in a red outfit on top of some oil drums. Otherwise, the fights aren’t bad and have a little Hong Kong flare to them.

For Rothrock fans, Godfrey Ho completists (if such people actually exist) and lovers of bad cinema ‘Undefeatable’ is, well, pretty hard to beat!