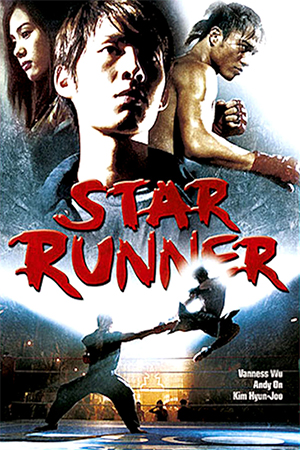 Some of my favourite action films of all time have been “tournament movies” of one kind or another, including such classics as ‘Enter the Dragon’, ‘Bloodsport’ and to a lesser extent ‘No Retreat, No Surrender’. So, whenever a new film with a tournament theme is announced, I always put it to the top of my wish list.

In recent years, tournament movies have only ever failed to disappoint (see ‘Extreme Challenge’ as an example). I don’t know if this is because my old favourites from childhood have taken on a sentimental or “Golden Era” aura or whether it is the shallow nature of recent tournament films and their failure to flesh out anything other than a final fight scene.

In the case of this film, it was still disappointing after I expected so much, but for different reasons. In terms of characterisation and drama, ‘Star Runner’ is better than most other HK actioners of recent times. As it has no pretences of being an International Blockbuster, it feels more authentic and there is plenty of time allowed for friendships, love, honour and so forth, which are so important when trying to get your audience to connect with the protagonist.

On a personal level, it was great to see so many old favourites in the cast such as Max Mok Siu Chung  (‘Pedicab Driver’), Lau Ka Fai (’36th Chamber of Shaolin’ – and now ‘Kill Bill’), Ken Lo (‘Drunken Master 2’) and Action Director Chin Ka Lok (‘Operation Scorpio’). Unfortunately, some of these guys are underused, especially Ken Lo, as we don’t get to see him in action, while his acting abilities are a little limited.  Of them all, Max Mok Siu Chung comes across the best displaying some good range, and being a focal point of the disharmony amongst some of the other characters. I don’t want to give any of the plot away, as it’s always best to watch films afresh, but suffice to say that it’s not just about the fights.

How about those fights? Well, this for me was the most disappointing aspect of the film. With some talented athletes on show, and a top notch HK choreographer, I was expecting a lot. Unfortunately, unlike the standard of action Ka Lok recently put out in ‘No Problem 2’ this leans more towards the quick-cut close ups of more recent Hollywood efforts. Most of the fights are also glossed over as short “highlights” rather than letting us see the full action.

With its influences ranging from such classics as ‘Bloodsport’, ‘Rocky’ and any number of other tournament/underdog films, it goes without saying that there is nothing new here. Nevertheless, it’s still worth watching, but probably not an essential purchase.