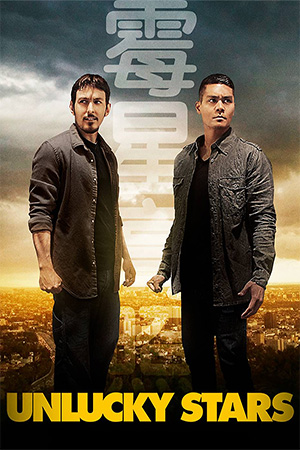 A glorious tribute to the Hong Kong action films of the 80s and 90s, ‘Unlucky Stars’ is a hoot and a cracking martial arts film to boot. Mixing comedy and action to entertaining effect, the film affectionately plays homage to the films of yesteryear that many of us grew up watching: numerous of which starred Jackie Chan, Sammo Hung and Yuen Biao. It follows two would-be bounty hunters (Ruel and Quitugua) and a down on his luck stuntman (Vladburg) getting into all kinds of martial arts escapades with the local mob, a once successful Peruvian action star (!), his biggest fan and a reality show for rehabilitating action stars (!): chaos, comedy and kung-fu ensue.

Made by and featuring a good portion of The Stunt People/’Contour’ alum along with stunt peeps such as Sam Hargrave and Emmanuel Manzanares (who have worked on the action on the likes of ‘Wolf Warrior 2’ and ‘Logan’, among many others), ‘Unlucky Stars’ is full of energy, enthusiasm and epic fight scenes. Seemingly a passion project of Ruel, Quitugua and Rimburg the three (along with the rest of the team) pull out all the stops on a tiny budget to deliver a kung fu blowout. Primarily following Ruel and Quitugua’s arguing bounty hunter’s the film sets its buddy banter tone from early on and the comedy hits the mark as much as the action. A loving wink to the action films that populated the 80s and 90s the film glides along on the charisma of its cast, who all seem to be having fun. While the various plots seem unconnected and a little convoluted to begin with they all cohere satisfyingly as the characters gradually all bumble into one another and, well, everyone pretty much ends up fighting everyone at one point or another.

And what glorious fighting it is. These guys know their choreography and put it to incredible use in a surfeit of well shot and excitingly sustained fight scenes. Ruel, Rimburg and Quitugua all get to cut loose and orchestrate some wicked multi participant fights. Hargrave and Manzanares also get to strut-their-stuff, along with a bucket load of other talented fighters (too many to mention unfortunately), which all builds to an epic action blow out. The impressive showdown cuts between 3 different fights effortlessly, giving the impression of one giant fight scene, and will surely sate the most hardened fight fan. Couple all this with the easy going charm and comedy (Hargrave is especially good as the somewhat goofy and likeable bad guy), cameos from the likes of J.J Perry and Amy Johnston, and references galore (the Golden Harvest style intro, Rimburg’s Sammo Hung inspired look in the final fight) and you have a film that is hard not to like.

Sure it’s a little rough around the edges and, as mentioned, a little convoluted at first but ‘Unlucky Stars’ finds its groove fast and keeps on grooving for the rest of its runtime. Fun, fast and fight packed.