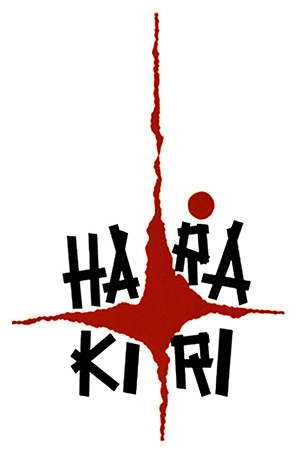 A slow burn samurai classic, ‘Harakiri’ is a tough and tense dissection of the samurai code and what the honour of a noble death to a samurai really means. Japanese filmmaker Masaki Kobayashi crafts a riveting character piece that builds to an epic explosion of violence as a down trodden but noble samurai searches for the truth about what really happened to his son in law. Tsugumo turns up on the doorstep of Lord Iyi requesting to commit hara-kiri (ritual suicide performed by once noble samurai’s wanting to die with some honour intact). Iyi grants him his request but not before he recounts a similar incident some months earlier of a young outcast samurai, Motome, who requested the same honour. However, Motome was ridiculed in front of Iyi and his men, not allowed to perform the honourable ritual he was promised but instead forced to commit the act by using bamboo blades. Knowing this and with Motome being his son in law, Tsugumo has entered Lord Iyi’s compound not to perform hara-kiri but extract revenge and expose Iyi and his clan for the dishonourable samurai they are.

From the sumptuous cinematography capturing the perfectly restrained interiors of the Iyi compound to the attention to detail of the time period and styling, Kobayashi creates a realistic world of a bygone samurai era. Not wanting to rush his story and unfolding much like a stage play, the director lets tension seep into the narrative as the respective protagonists tell their stories of how they came to be at this point. We see through flashback of the hardships Tsugumo and Motome have had to endure, each bringing them to this point where they are about to perform hara-kiri in front of Iyi. Kobayashi wisely lets us believe, at first, that Iyi is a noble Lord proud to be in the presence of honourable samurai but as the tension mounts and Tsugumo reveals his true purpose, Iyi is shown as far from honourable and is in fact using samurai code for his own gain. Kobayashi uses the confrontational nature and play like structure of his narrative to show the hypocrisy of the samurai code as those use it to better themselves and live in respect and fortune while others suffer.

While the narrative does sag a little with a flashback sequence telling of what happened to Motome’s sick wife and son taking up perhaps a little too much time (and ever so slightly slipping into melodramatics), Kobayashi creates a near perfect blend of pressure building storytelling and samurai styling as the story reaches its inevitable violent climax (and what a one man going up against an army of samurai battle it is). The confined surroundings of the Iyi clan compound add to the mounting tension and it’s hard to imagine the samurai world being created more perfectly than it is here. An incredible samurai film and a classic piece of Japanese filmmaking this is old school filmmaking and storytelling at its best. If you’re any kind of chanbara cinema fan and if you haven’t seen it already then ‘Harakiri’ is an absolute must see in all its widescreen glory.