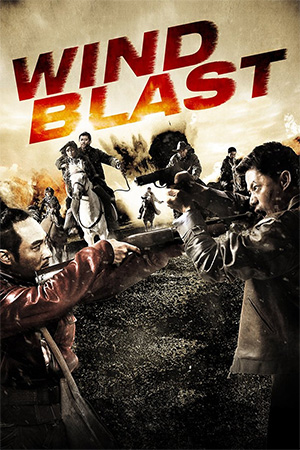 Quite literally a (ahem!) blast, ‘Wind Blast’ is a pure action film that sticks to its ever-firing guns as it tears across the beautiful and rugged landscapes of the Gobi desert upping the ante with every scene of action and mayhem. One time prospective boxer but now two-bit crook and killer Zhang (Xia Yu) high tails into the remote lands of the Gobi desert with pregnant girlfriend and evidence of the mob boss who hired him to carry out the kill. Detective Leopard (Duan Yihong) and his motley crew of cops head off in pursuit of Zhang, as do a pair of assassins (Francis Ng and Yu Nan) sent by the mob boss who hired Zhang, to kill him and retrieve the evidence. All out war pretty much erupts as the opposing groups face off against one another in one of the harshest landscapes on earth.

Wonderfully shot and often breathlessly staged Gao Qun-Shu’s film delivers full throttle action by dropping a group of characters into a remote location and setting them off against one another. With western undertones abound, ‘Wind Blast’ is like one epic dual between the cops and assassins as they all attempt to keep hold of Zhang and return him to civilisation. The setting is as much a character as the any of the trigger-happy humans and thanks to some glorious wide screen cinematography; the Gobi desert is captured in all its harsh reality. From the rocky terrain to the sparse desert to the deserted town where the explosive finale is set, the location frames the action, with director Gao Qun-Shu and action choreographer Chung Chi Li using the setting to enhance the action scenes as it proves as much an adversity as the deadly assassins do for our reluctant heroes.

Action is the name of the game and if you miss the action extravagance of the 1980s then ‘Wind Blast’ has got it covered. From some awesome car stunt work, to gunplay, to (a little bit) of martial arts, ‘Wind Blast’ delivers some kick ass action. From the explosion heavy finale (which also bizarrely, but visually impressively, manages to work in a rampaging herd of what appear to be Shetland ponies!), to an incredible chase scene featuring a duel between a jeep and a massive truck the action is slick, full on and refreshingly sustained. No quickly edited scenes of CGI nonsense over before they begin but thought out and lengthy action scenes that raise the tension as much as the spectacle and feature the whole cast being put through their paces. However, the best scene is a nighttime attack on the hero’s camp, which uses the dark, the open space, a torch and a nifty gun that shoots metal arrows to create a scene that is tense, breathless and kicks off a whole host of relentless action.

‘Wind Blast’ is a fun and well made film but it will no doubt irk those who always wax lyrical about lack of plot this and lack of plot that. Admittedly the narrative is somewhat slim as it is just about setting off a group characters against one another in a novel setting and letting chaos reign but this serves an action movie like ‘Wind Blast’ well and the cast certainly throw themselves into the action with aplomb. Xia Yu and Duan Yihong make for convincing heroes with Francis Ng also memorable as a world-weary assassin (complete with insane hairstyle!). Likewise Yu Nan makes for one hot assassin, full of menace and there is a whole host of supporting characters to root for as the danger and action escalate. It’s a little disappointing there isn’t more martial arts featured (save for one cool scene) as it would have been nice to see Wu Jing cut loose more of his kung fu moves and the ending is tied up a little neatly and abruptly but on the whole Gao Qun-Shu has crafted a visually dynamic film: a modern day western with some stellar action scenes and a distinctive setting memorably rendered on screen to create a unique action film.