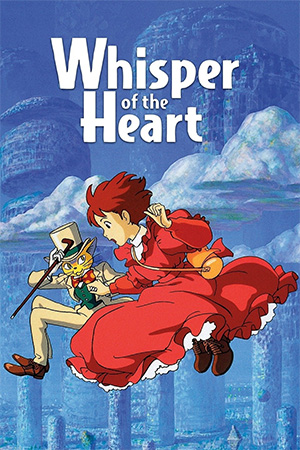 Shizuku is a young teenage bookworm who is approaching the last summer of junior high school. Energetic and free-spirited, she harbours ambitions to write but is afraid of failing so she plans on using the library to read away the summer vacation. When she finds that the same mystery borrower has got to every book before her, she meets Seiji, a trainee violin-maker who encourages her to stop reading and start fulfilling her dreams.

Foregoing any elements of fantasy, ‘Whisper Of The Heart’ is one of the more grounded entries into the Ghibli back catalogue. Written by Hayao Miyazaki and directed by his now sadly deceased protégé Yoshifumi Kondo, the film is a coming-of-age story that delivers so much more. Opening with a fairly sedate slice of a young girl’s daily life, the film soon evolves into a rollercoaster ride of self-discovery and heartfelt romance that really covers every aspect. Providing an extremely comprehensive build-up with plenty of attention to detail, you really feel like you get to know Shizuku even though you can never precisely tell how her tale will unfold.

The romance, which plays a big part in the movie, is actually superbly handled. Considering these are young kids who are experiencing their first tastes of love, the subject matter walks a fine line that could border on sickly sweet. Once again though, Ghibli (or perhaps just Miyazaki himself) proves to have a great understanding of how to speak to an audience without ever dumbing it down or overdoing it. Somehow the film manages to cover plenty of ground, ranging from the typical “friendzone” scenario right through to first love, all of which are extremely close to home and may even have a few of you shedding a tear or two.

As has seemingly become the norm with Ghibli productions, the animation in ‘Whisper Of The Heart’ is second to none. Everything from the backgrounds to the people are all excellently represented, with a real eye for the little details. Expressions on the character’s faces are also spot on, retaining a cute innocence that only animation can provide whilst never really going over the top. The musical score provided by Yuji Nomi also deserves a mention as it plays a big part in helping to retain the atmosphere. The majority of it is fairly light and upbeat but the mix of classical and strange electronic sounds really fit the mood perfectly.

‘Whisper Of The Heart’ is a heartfelt and moving piece of cinema that expertly manages to cover everything from first love and friendship to family and ambition. Definitely a movie that will take pride of place in your Studio Ghibli collection.