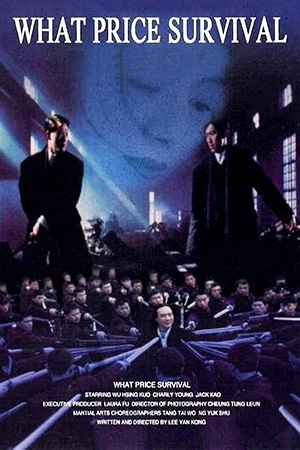 When Wang Ching Kuo (Tsui Siu Keung) wins a duel against Pai Fu Kuo (David Chiang), Ching Kuo demands that Fu Kuo hands over his son rather than taking his life. Fu Kuo’s son Ning (Wu Hsin Kuo) grows up not knowing who his real parents are and Ching Kuo has led him to believe that Fu Kuo is responsible for their death. With an intense desire for vengeance Ning tracks Fu Kuo down to take revenge. Ching Kuo, knowing that Ning is not Fu Kuo’s match enlists the help of  Wu An Kuo (Damian Lau) to assist in defeating Fu Kuo. As Ching Kuo had planned Fu Kuo is defeated and killed. However Ning sequentially discovers that Fu Kuo was in fact his real father. Ning confronts Ching Kuo, but unable to overpower him Ning finds himself on the run with Ching Kuo’s daughter Hsiao Lian (Charlie Yeung). However Ning must face him again.

‘What Price Survival’ was initially billed as a remake of the Chang Cheh classic ‘One Armed Swordsman’. However this is not the reality as all the main characters keep all their limbs until the final showdown. Anyone who wants to see a new take on ‘One Armed Swordsman’ however, should instead check out Tsui Hark’s ‘The Blade’ made the following year.

The performances are all adequate and the presence of veterans Tsui, Chiang and Lau are a definite plus point for this film. I would however be inclined to question Wu Hsin Kuo’s ability to carry a film as the real tedium begins with David Chiang’s exit from the film. The cinematography is also of a very high standard. The praise however ends therein.

Director Daniel Lee later took the helm of ‘Black Mask’ starring Jet Li. However despite having Yuen Woo Ping as action choreographer, it still took some criticism over the MTV style camera and editing techniques employed during the action sequences. ‘What Price Survival’ may be the evidence that Daniel Lee was the guilty party as the same problem persists, only to a larger degree. While some sequences aren’t that bad others begin to verge on being unwatchable making it hard to admire the choreography. Ultimately the action remains rather tedious, which is a shame when you consider that Tsui Siu Keung and Damian Lau were participants in some of the industry’s most notable sword battles in Ching Siu Tung’s ‘Duel to The Death’.

‘What Price Survival’ is also very poorly paced. It plods along very slowly then at several points threatens to speed up only to disappoint. This happens most notably when Ning confronts Ching Kuo. It feels as though the film is really about to gain momentum only to become more tedious than all that had preceded it.

‘What Price Survival’ is nice to look at on the surface but is ultimately very tedious and the action sequences make for insufficient compensation. All in all, dull and boring.