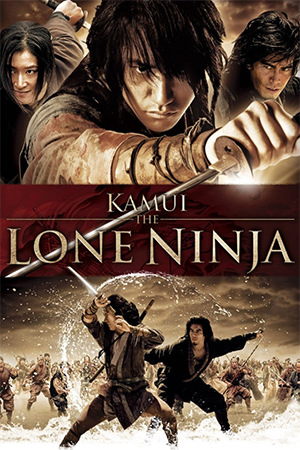 Colourful, comic booked tinged ninja tale, ‘Kamui’ is a fun sword swishing time that packs in action, drama and some striking scenery making it a breath of fresh air from all the po-faced, serious samurai flicks out there. Not to say ‘Kamui’ isn’t serious as it does allow a good chunk of its running time to character and drama meaning we, the viewer, get a nicely balanced mix of everything: the action is never far away but character is also nicely established meaning the film never falls into being a shallow exercise in spectacle.

Kamui (Matsuyama) is an expert ninja, highly adept at killing and fighting, trained from when he was a young boy. But tiring of the life he defects from his clan, going rogue, and is non-surprisingly hunted down by his former brothers in blood. After several daring fights and narrow escapes he shacks up with aging fisherman Hanbei (Kobayashi) and his family in a fishing village on a remote island. Hanbei’s wife Sagura (Koyuki) is herself a rogue ninja and recognizes Kamui from a previous confrontation. Believing Kamui is here to slay her, Sagura attempts to kill Kamui but he only wants to lead a normal life and spares Sagura her life convincing her they can now live a peaceful existence. But it’s not long before Kamui’s and Sagura’s past lives catch up to them, in the form of who at first appear to be allies, and Kamui finds himself fighting for his village, his new surrogate family and his life.

Yoichi Sai bathes his film in bright colours and sunny settings creating a sort of rich, vibrant, slightly comic book world where ninja trained warriors do battle. The beach side setting where much of the film takes place provides a unique and warm visual and Sai shoots his film wide. Long shots, both stationary and moving, give the film flow and it’s great to see a filmmaker using long and wide shots for a change, not shooting everything in close up and editing it all into a frenzy just to try and give us the illusion of intensity. The movie is shot wide and benefits from it, meaning in the action scenes we actually get to see what is going on. The film opens and ends with some big, entertaining set-pieces, the action fluid and well staged, climaxing in an excellent one-on-one battle on a beach between Kamui and his arch foe. Despite some CGI enhancement, this finale is two dudes going at each other with swords in some slickly choreographed action.

If ‘Kamui’ does have a down side, it would be all its CGI enhancement. Used to heighten the surroundings, colour scheme and many of the action scenes, the CGI isn’t always convincing and will no doubt illicit many groans from hardened film fans who will feel it just doesn’t past muster. I suppose it doesn’t but it certainly doesn’t ruin the film, it’s just an unfortunate pitfall of modern filmmaking. It does mean we get characters doing physically improbable stunts and fight moves in the action scenes and while it doesn’t always convince it does make the ninja fights more mystical in their execution. Despite the ropey CGI the production values are of a high standard and while the story is somewhat predictable the filmmakers have put enough effort in to make us care about Kamui and the other characters meaning the film is always engaging and often exciting.

The trademark ninja costume may not make much of an appearance but these guys fight like ninjas and some butt they kick too. A fun film that has much to offer if you can go along with it’s sunny, comic book vibe and leave your need to constantly rip apart dodgy CGI (though even I’ll admit the scenes featuring ravenous CGI sharks are distinctively ropey!). However, ‘Kamui’ features some cool characters, some kick ass action and is, overall, just a fun movie.