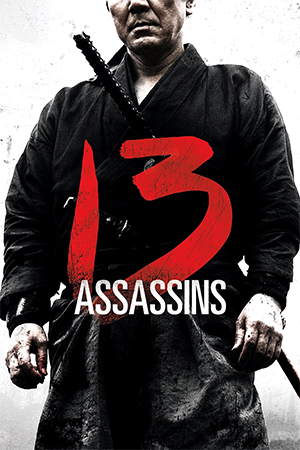 Now this is one big, bad samurai movie. A grand tale of men banding together to fight an unrelenting evil, content to die if they can free their land from the marauding tyrant and his gargantuan army. Lord Naritsugu is an evil man. An evil man with a huge army and loyal subjects at his disposal meaning he can wreck havoc across the land and indulge in any violent perversity he wants. But he indulges one two many times when he rapes the daughter in law of a respected samurai and then slays her husband in front of her thus causing her to take her own life. The man’s father, who feels responsible for their deaths, decides something must be done and seeks help from a close friend and equally respected samurai. When they also witness Naritsugu’s true perversion and barbaric behaviour, in the form of a poor woman who has had her limbs and tongue severed and was forced to live as Naritsuga’s slave, the men put the word out that they intend to fight back. Soon, samurai and assassins from all over, young and old, have offered their services and the band of 13 hunker down in a deserted village to set a trap on the evil lord and his men.

An almost perfect blend of slow build storytelling and blistering action, 13 Assassins is Eastern storytelling at its best, a samurai masterpiece and an auteur showing he still has creative muscles left to flex despite churning out something like four films a year for the past fifteen or so years. While many enjoy Miike for all his quirkiness, weirdness, nastiness and down right oddness, ‘13 Assassins’ is easily his most accomplished work since his other bona fide masterpiece, ‘Audition’. That’s no disrespect to his other eclectic work as the likes of ‘Gozu’, ‘Ichi The Killer’, the ‘Dead or Alive’ films, ‘Izo’, ‘Visitor Q’, and ‘The City of Lost Souls’ (and the many, many others) are all worthy, inventive, enjoyable and, in some cases, downright awful cinema: Miike should be applauded for making so many diverse films. Anyway, many others will (and have) enjoy dissecting the director but with ‘13 Assassins’ he has simply made a big, loud and proud samurai flick.

From its slow burn first hour as we meet the 13 assassins and learn of Naritsugu’s evil ways to the almost full hour of apocalyptic samurai action that follows, Miike’s film is a deft blend of drama and action: a film that brilliantly builds to this one epic battle where many will end their lives, in what they consider the most honourable way possible, in order to stop another man’s evil. Some may find the slow build testing their patience but it is the perfect way to build to the important event that completes the film. The flick is essentially about a group of men on a mission and serves the world of the samurai well. There are plenty of other films out there that explore the lone warrior and rigorous devotion of the samurai; this film puts this devotion into action as these men use their skills to sacrifice themselves for the greater good.

The authentic production design and subtle camerawork help to evoke the detail of the era but don’t worry Miike fans (and lovers of quirky cinema) there are plenty of the director’s darker touches peppered throughout. Not least in the hideous imagery of the that poor limb severed woman, the evil lord slowly killing a family (child and all) with a bow and arrow and come the epic battle, a house that quite literally gushes blood at one particularly excessive moment. And that 40-50 odd minute finale battle? Well, it’s, well, epic: samurai action presented on a grand scale as thirteen men quite literally take on an army of hundreds. Miike wisely stage the action within the confines of a sealed off town, bringing an incredible frenetic charge to the fights as the assassins hack and slash their way through the ever escalating number of soldiers. No doubt it may not live up to the hype that surrounds it in some viewers eyes but this grand scale battle is epic, eye searing greatness.