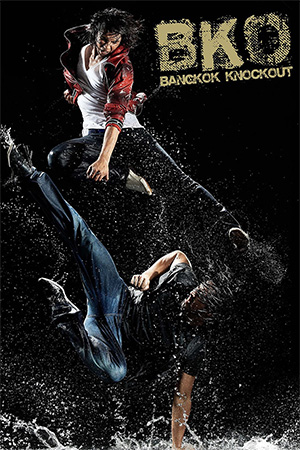 When a Hollywood producer comes looking for a fresh batch of stuntmen, a handful of friends enter the auditions under the name of the Vicap team. After successfully completing a short and fairly simple trial, the team decide to head out and celebrate with a slap up meal. Little do they realise though, the food has been drugged and they wake up in a strange house on an abandoned lot. As they attempt to familiarise themselves with their surroundings, the team are set upon but a group of masked assailants who kidnap two of their number. Meanwhile, the so-called Hollywood producer has arrived with several rich businessmen who begin placing bets on how the battles will play out. Will our heroes be able to escape alive or will they all become victims in a sick game organised for rich people’s amusement?

If you’ve been eagerly anticipating ‘BKO: Bangkok Knockout’ then I highly doubt you’re too concerned about the plot or performances. However, as some people apparently consider me to be a movie reviewer (hi mum!), I feel obliged to give you my opinions on them anyway. Unsurprisingly, it’s all pretty negative stuff and those of you hoping for anything other than action will be extremely disappointed. What little story there is is covered in the first 10 minutes or so and then it’s nothing but fight scenes from there on out. As much as this may please the action junkies amongst you, it doesn’t do much for the movie as a whole because you may as well just be watching a selection of stunt showreels. The assembled cast don’t exactly help matters either, as most of their “acting” comes right out of a soap opera and there isn’t a single one of them with the screen presence of a Tony Jaa. Rittikrai himself does occasionally entertain as one of the main villains and his clichéd cackling Caucasian boss is as amusing as ever, but overall the movie definitely lacks the sense of fun found in ‘Born To Fight’.

So now that we’ve got the doom and gloom out of the way, I’m sure you’re all eager to know how ‘BKO: Bangkok Knockout’ fairs in the action stakes. Thankfully, the majority of what the movie has to offer is right on the money. Rittikrai’s choreography is as inventive as ever, making good use of the cast’s versatility to expertly showcase a number of different martial arts styles. Each of the fights is very frantically paced with no room for excessive slow motion or repetition; it’s just shot after shot of superbly put together one-twos and acrobatic manoeuvres that will have your jaw hitting the floor. Despite all of this quality though, I do still have a couple of (perhaps overly picky) issues that stop the movie from being a classic. First off, there’s a fair bit of obvious wirework here, which is a shame because it seems unnecessary. I understand if it’s being used to enhance a kick or make a stunt safer, but the addition of superhuman moves in what is a modern day movie seems utterly pointless. My other bugbear is with the way in which most of the fights are staged. Practically every one of them sees the hero or heroine getting the stuffing beaten out of them, before they suddenly turn into the Hulk and can do no wrong. I know that this often works in Rocky-esque movies, but with so many fights banded together it feels rather silly to use the same format over and over.

All in all, ‘BKO: Bangkok Knockout’ delivers pretty much exactly what you would expect; a non-stop rollercoaster ride of brutally brilliant fight scenes housed in a sorry excuse for a movie. If you’re okay with that, then rush out and see it today!