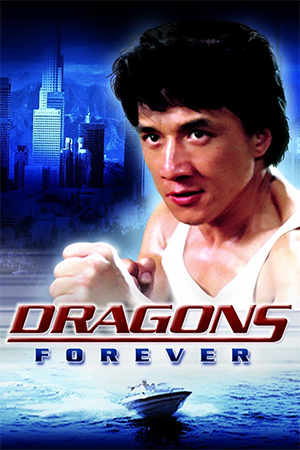 When a fishing pond is polluted by the local chemical plant, the owner (Ip) decides to take the culprits to court. The villainous cigar-chomping plant owner (Wah) decides to hire a slippery, yet charming young lawyer (Chan) to delay the case indefinitely, forcing the case out of court. The lawyer uses his shady friends (Hung and Biao) to gain information about the opposition, but soon Chan and Hung realise that they’re falling in love with the very ones they want to spy on. Added to this is the discovery of what the chemical plant is really producing; behind the guise of big business is really a refinery for drugs. When Hung is captured by an army of thugs during a snooping mission at the factory, Chan and Biao leap into action.

Having starred in such classics as ‘Project A’ and ‘Wheels On Meals’, the ‘three brothers’ – Jackie Chan, Sammo Hung and Yuen Biao – are reunited in another hugely enjoyable action romp. The film’s uneven narrative is compensated by the eye-popping action; the film features impressive battles in a nightclub, on a boat, between Yuen Biao and Billy Chow and famously the finale which sees Jackie Chan in a re-match with Benny ‘The Jet’ Urquidez. Sammo yet again packs the cast with quality, both in terms of villains (Yuen Wah, Dick Wei, Billy Chow, Philip Ko…) and actresses (the always reliable Deanie Ip, Pauline Yeung and Crystal Kwok). Chan and Hung continue to substantiate their legendary status in the cinematic hall of fame, but it is Yuen Biao who really steals the film. Playing a paranoid and slightly unhinged character, Biao shines and gets another opportunity to show off his acrobatic skills. ‘Dragons Forever’ doesn’t hit the heights of ‘Project A’, but is still a prime example of Hong Kong’s Golden Age.