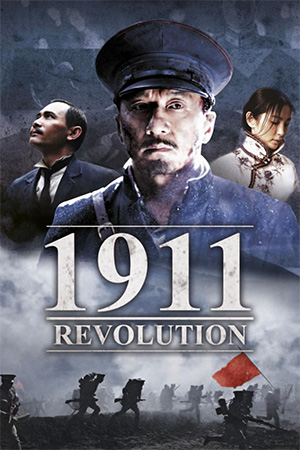 Touted as Jackie Chan’s official 100th film, ‘1911’ is yet another good looking Chinese epic that tries to cram way too much historical happenings into a somewhat brief running time but is still an okay stab by Chan to tackle “serious” filmmaking once again. Well, it’s decent for its first hour or so before succumbing to the predictable propaganda pushing and escalating earnestness that all but derails the fine scenes of combat and solid acting that has gone before. Set, initially, during the Guang Xi uprising Chan plays Huang Xing a fearless resistance leader and deft military tactician who leads an army of only 200 men against the 20,000 or so strong of the opposing Imperial army. From here, Xing becomes the military commander to Sun Yat-sen (Chao), a revolutionary determined to free China from Imperial rule and the two, along with many loyal followers, set the stage for an uprising that will shake the very foundation of a country.

Taking on producing, action and co-directing duties (with ace cinematographer Zang Li: ‘World Without Thieves’, ‘The Banquet’, ‘Red Cliff’) Chan is his usual watchable self, acting as part of an ensemble cast rather than always being front and centre (though, he does, it has to be said, play the most shamelessly heroic character). Surprisingly, there is not as much epic war combat as the marketing material suggests, the film more concerned with the politics and drama of this important stage in Chinese history: seemingly trying to fit in every person that was involved in the war into the scant 95 minute run time. Unfortunately, this is what lets the film down and prevents it from becoming the true epic it wants to be. Attempting to cram in every figure that has something to do with this dramatic change in Chinese rule, the filmmakers constantly resort to putting text on screen to explain who everyone is and which side they’re on (the text often only on screen for a split second and for characters who appear in one scene and then are never seen again) and to fill in big gaps in what has happened between each of the battles. A good idea in theory but somewhat poorly executed, meaning the film becomes a frustrating watch as events jump around so quickly and people come in and out so fast you wonder why on earth we needed to know who they were. It doesn’t help that the text is so damn small it makes reading it difficult.

‘1911’ still features some impressively staged war combat and even a nifty little nod to JC fans where he cuts loose in one short and sweet martial arts bout. Chan is certainly good as the show-no-fear resistance fighter, shedding all his knockabout antics to play a much more serious, but likeable, character. It’s unfortunate the last 20 minutes or so resort to propaganda pushing and a tone that pushes earnestness through the stratosphere, ending the film on a somewhat disappointing note. Often stunning to look at, Chan is fine, some decent combat but lacklustre execution mar what should have been a 100th film milestone.