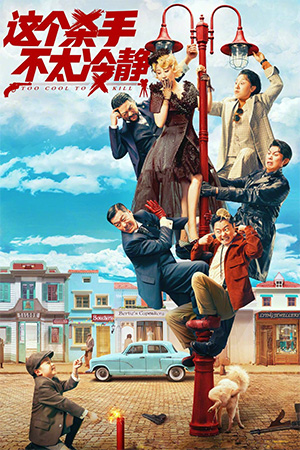 ‘Too Cool to Kill’ was one of the big hits of the Chinese box-office in 2022. A remake of Japanese comedy ‘The Magic Hour’, ‘Too Cool to Kill’ teams the stars of two of China’s biggest recent comedies: Wei Xiang from ‘Hi, Mom’ (admittedly ‘star’ is a bit of a stretch as he didn’t have a big role in it!) and Ma Li from ‘Never Say Die’ and ‘Goodbye Mr Loser’. The result is that rare thing – a remake that is even better than the original.

A film director and his actress sister find themselves in danger when the movie they have made, funded by a local kingpin, fails spectacularly. With execution looming over their heads, the pair manage to save their skin by claiming to know the whereabouts of legendary hitman Killer Carl, the very same person who is currently trying the kingpin. The mob boss agrees to release the pair if they can introduce him to Carl as his fame is so fabled that no-one has seen his face and lived. Unfortunately, neither the director nor Milan, his sister, know the real Carl and both think about skipping town in the morning. It’s at this moment that bumbling wannabe actor Wei Chenggong arrives and the guileless performer is convinced to play the ‘role’ of Carl. The only problem is that Wei thinks that the perilous situation he is in is just part of an unorthodox film and that he is secretly being recorded. Another problem emerges when Milan starts to develop feelings for him.

Xing Wenxiong’s delightful remake of ‘The Magic Hour’ retains the charm and wit of the original, but makes some key changes to improve it. The first one – and perhaps the biggest contribution to its success – is the tweaking of the lead character, here played by Wei Xiang. In ‘The Magic Hour’, Koichi Sato was the unlikely hero and had just the right mixture of pomposity and delusion to be an enjoyable protagonist. Yet Wei Chenggong is a very different character to build the story around and yet, somehow, it works even better. There is an art to creating a bumbling hero; if they are too awkward and idiotic, their actions become annoying and they lose any sympathy the audience might have for them. To juxtapose a character like Wei Chenggong with numerous straight players could also make his Clouseau-esque antics somewhat embarrassing – there’s nothing more difficult to watch than someone trying to be funny so very desperately. Thankfully, Wei Xiang is superb in the lead role, giving the impression that he is either the dumbest man on the planet or the smartest. It takes a perfect trinity of good writing, directing and performing to achieve this and ‘Too Cool to Kill’ pulls it off with considerable skill.

Remarkably, despite being a genuinely hilarious comedy (more so than its inspiration), ‘Too Cool to Kill’ even manages to imbue some scenes with genuine pathos. It’s a very risky move, but Xing Wenxiong never overplays it, peppering certain moments with unexpected poignancy. Again, this is something that ‘The Magic Hour’ never really attempted, so to see it woven into what is a very funny film shows the aptitude of all involved. Wei Xiang deserves the plaudits for being so adept at changing his manner while his support cast is excellent; Ma Li, especially, is a very strong addition to the cast and proves what an accomplished comic actress she is becoming.

‘Too Cool to Kill’ is filled with references to other films, but these are never cheap or gratuitous. It is just the cherry on top of a comedy that is lively, charming and impossible not to like. While some Chinese comedies might be seen as rather parochial, this offers something for all audiences, providing viewers with a wonderful two hours of entertainment and a delightful new comic actor in Wei Xiang. ‘Too Cool to Kill’ is a hoot.