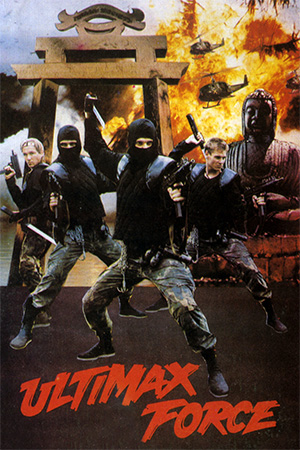 So not only do we get ninjas doing cool ninja stuff we also get Uzis: which means lots of gunplay and squibtastic action as well. Ok, so ‘Ultimax Force’ isn’t really a great film and is a cheapie Philippine action flick made to cash in on the 80s fascination with all things ninja but hell if it ain’t a good old cheesy time with some pretty solid action. It’s standard plot 101 as a bunch of non-acting dudes are recruited to go and rescue some other poor chap who is held captive in the deepest jungles of Vietnam. Said four dudes are ninja badasses and are recruited by their ninja school (yes: ninja school which is blatantly signposted in one hilarious scene meaning these ninjas aren’t so secret!!) to rescue said captive and the four blocks of wood (albeit highly trained ninja combatants) head off into the jungle, complete with Uzis, to fuck shit up.

Completely unintentionally hilarious in how serious it takes itself and that not one of the leading men express any other facial expression other than staring blankly and delivering their lines in an (again) unintentionally hilarious monotone drone, ‘Ultimax Force’ still gets the fun thumbs up due to some cool action (which rarely lets up) and that it being a decent little ninja flick. And it’s got Uzis in it. The action is pretty tight and fairly well choreographed, and the violence is pretty harsh. Many people are gunned down quite graphically, and the body count is typically high for a 1980s action flick. Some may be disappointed that the martial arts is a little thin on the ground to make way for all the gunplay but we are treated to one impressive sequence early on where the heroes have to prove themselves to the ninja school that they are worthy of the mission with some neatly choreographed ninja fighting and weapon work.

‘Ultimax Force’ has it all really: great B-movie title, lots of ridiculous moments that defy logic, unintentionally hilarious acting and a heap of cool action. So all-in-all a B-movie action fans and lovers of trash cinema dream come true. Oh, and it’s got Uzis in it. Sweet.