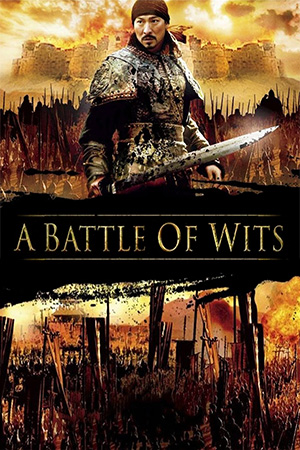 There’s been a preponderance of stylised historical epics from China in the past decade with a revisionist take on accepted history often de rigeur among directors. The visual splendour proves to be even more important than the content which can be a blessing or a malediction; there has been much to satiate the eyes, but not always much for the heart or soul. Acclaimed Hong Kong film-maker Jacob Cheung gives viewers the antithesis of these recent epics and in so doing delivers a work worthy of being included among his best work.

The walled city of Ling is bracing itself for an inevitable attack from the vast, truculent force of Zhao, a state who vastly outnumber their cowering rivals. The king of Ling calls on the spiritually-focused, philosophical warriors of the Gozi, a people who excel in military tactics yet only help those they perceive to be in genuine need. The Gozi send a lone figure, Ge Li (Lau), to assist and his potential intervention comes just moments before the amassed army of Zhao launch an assault on Ling. Ge Li dissuades the king and his advisors from surrendering and urges the people of the city to use the obvious strengths of the surrounding ramparts to their advantage. His advise is utilised and they successfully repel Zhao’s multitudinous warriors.

Ge Li’s popularity with the thankful inhabitants of Ling proves to be his undoing though as the king, ego being puffed up by his feckless chief advisor, becomes jealous of the position this upstart is taking in the public’s affections. This seething jealousy moves the king to oust Ge Li from his current place of trust, harshly punish all those who support him and forcibly eject them all beyond the city walls. Only due to the help of the king’s son does Ge Li manage to leave Ling with his life though the ungrateful people within are now left to the mercy of one last ingenious attack from an off-shoot of the Zhao army.

Jacob Cheung used his skill for taking common themes and infusing them with his own blend of pragmatism and fatalism in the last collaboration with Andy Lau, the surprisingly brave ‘Wait ‘Til You’re Older’. In that film, the idea of a boy living in an adult body and experiencing the trials of maturity was laced with Cheung’s own pensive philosophy. ‘A Battle Of Wits’ enters a crowded marketplace of Chinese epics that have each tried to trump their rivals with even grander battle scenes, more flamboyant costumes and greater visual scope. Yet Cheung’s work is a little more cerebral and a little less action packed than is indicated in the first ten minutes or so, a fact that adds to the overall appeal of this refreshingly thought-provoking chronicle.

Though this may have intentions of being a character-driven piece rather than one of visual splendour, ‘A Battle Of Wits’ still immerses the viewer in the world of Ling, all manner of life bubbling within the city walls. It may not be as gritty as the reality would have been, yet the location used and the attention to detail within this vital aspect of the production proves to be something enthralling. A few of the computer effects may not be seamlessly integrated into the final look of the film, but these are minor quibbles as the intention to create a spectacle with an emotional core resonant enough to convey its very unique philosophy is well achieved.

‘A Battle Of Wits’ is that rare work that is exciting, tense and yet is an introspective on the violence, war and conformity. Andy Lau has enough maturity now to make his world-weary starring role realistic while Jacob Cheung constructs the story in such a way to pull the rug from under the cine-literate audience more than once. The romantic sub-plot is underplayed – not necessarily a weakness given the predictability that such plot-threads tend to create – though this is still an important thread of humanity in a narrative that muses on that very subject.’A Battle Of Wits’ may not paint the pretty pictures of its contemporaries, a fact that will surely bar it from the greater global appreciation of previous Asian historical epics as this seems to be the only criterion used to judge such works by Western critics, yet it’s an intelligent production that is a credit to director and star.