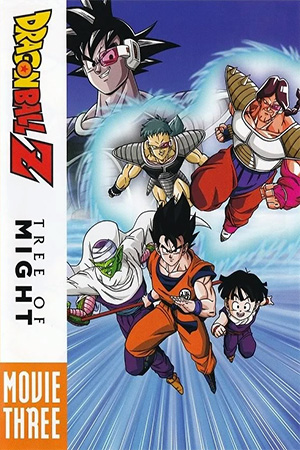 When a group of Frieza’s minions discover that the Earth is still yet to be destroyed, they decide to use it to plant a seed for the legendary ‘Tree of Might’. This is no ordinary tree though, as once it takes root it will devour all life energy from its host, leaving the planet a deserted land where no living thing can survive. When Goku and his friends see what is happening, they try to destroy the tree but find that their powers simply aren’t enough. Suddenly, they come under attack from the group of space pirates, and Gohan is captured by Turles, their evil leader who also just so happens to be a Saiyan! Will Goku be able to save Gohan and the planet Earth?

Despite the initial promise of a number of varying plot elements (the tree, the forest fire, the pet dragon, etc.), ‘Dragon Ball Z: Tree Of Might’ quickly reverts to the familiar format of dishing up a handful of throwaway villains for our heroes to dispatch of. Normally this concept would make for perfectly acceptable filler, but the bad guys included here simply aren’t very interesting and even their plan/purpose for coming to Earth seems fairly questionable. Thankfully the series regulars are on hand to help flesh out the proceedings, but it has to be said that even they feel somewhat wasted and wind up as little more than background fodder. As for the main villain himself, it’s clear that they were running low on ideas for this outing as his entire premise for being is not only silly but also a little baffling when it comes to series continuity.

A lot of these issues could be overlooked however, if ‘Tree of Might’ was packed full of exciting action sequences. Sadly though, that simply isn’t the case and it’s hard to really think of any fights that stand out. All of the minions definitely seem to have their own specific sets of skills that should make for some interesting bouts, but it feels like they couldn’t be bothered to come up with inventive ways to use them. Instead, they have brief battles with some of the side characters before Goku wipes them all out in a single blow. The only other real battle comes when Goku faces off against the main villain (minor spoilers ahead) but even this is fairly tame, especially considering he winds up cheating and Goku is once again forced to whip out the Genki Dama.

‘Dragon Ball Z: Tree Of Might’ is probably the weakest of the movies up until this point, simply because it feels like a case of going through the motions. Sure, it’s nice to see everyone involved and a couple of new action sequences, but it all just feels a touch too lightweight and this is an outing that is unlikely to stand up to repeat viewings.