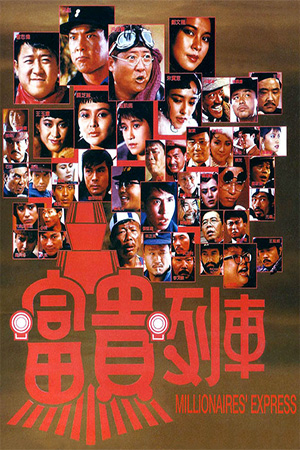 Sammo Hung once again assembles a superb cast and creates an excellent blend of comedy and top-notch fight action. In what could best be described as an ‘Eastern Western’, Sammo as director manages to put an ensemble of stars together who stand as one of the many good reasons to watch this film. The plot revolves around a portly ‘entrepreneur’ (Sammo – who else?) who returns to his home town with a posse of women and a dubious reputation preceding him. The newly instated town chief (Biao) soon uncovers Sammo’s plan to open a hotel and brothel in the town to reinvigorate the local industry (and line his own pockets). With this in mind, Sammo plans to derail a train full of wealthy passengers and ‘persuade’ them to stay at his various establishments. Although Biao opposes Sammo in an excellent one-on-one fight, the plan is successful and the numerous socialites frequent the town, spending liberal amounts of money in the process. However, what Sammo doesn’t realise is that a small army of bandits also had designs on the train and have now switched their attention to the town. All of the townsfolk must therefore forget their differences and join together if they want to have any chance of success.

The first hour of ‘Millionaires’ Express’ is built around comedy with brief spurts of action punctuating the storyline. This isn’t necessarily a bad thing though as the various madcap situations and character banters are very enjoyable and help introduce the plethora of Hong Kong superstars into the film. When the action does appear, it is certainly worth the wait as Sammo gives the viewer a number of exciting encounters: Sammo himself against Cynthia Rothrock in a brief, but well-choreographed skirmish; Yuen Biao and Dick Wei in another of their excellent screen battles; a superb tour de force showing by a young Yukari Oshima and a reminder of Hwang Jang Lee’s exceptional athletic prowess.

If there’s one person who shines among the stellar cast it’s got to be Yuen Biao in another one of his magnetic performances as an upright super-fighter. As with Sammo himself, Biao has always been adept at the physical side of film-making, but remains an underrated actor in the field of comedy. ‘Millionaires’ Express’ gives him a superb opportunity to play a very able straight man.

In summary then, ‘Millionaires’ Express’ is another superb production from Sammo Hung. Newcomers will enjoy the fight action, the slightly more experienced will also appreciate the comedy and the veteran viewer will be entertained by the great cast. To top this off, the Universe DVD is superb quality.