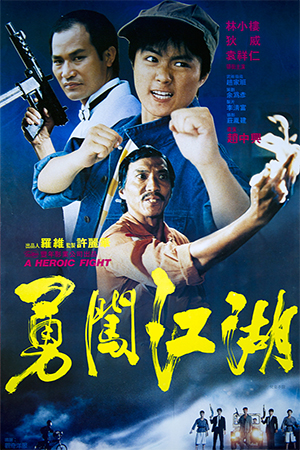 It’s ‘F/X: Murder By Illusion’ meets Yuen Woo-Ping’s ‘The Miracle Fighters’ in this completely potty Taiwanese action film that gives new meaning to that tired old phrase ‘has to be seen to be believed’. The Taiwanese cinematic psyche seems to lend itself to extraordinary physical and humour so low-brow that it makes Benny Hill look like Moliere; anyone who thinks 80s Hong Kong action comedies were ‘a little over-the-top’ may feel generous portions of melted grey matter gushing out of their ears. The rest of us will treat this like the wildly unbalanced ride it should be appreciated as.

An influential triad chief who has now turned his attention to legitimate business incurs the wrath of one of his rivals when he refuses to have any more involvement in the drugs trade. The bitter rival first attempts to kidnap his young daughter, but she is subsequently saved by the tomboyish young star of a famed stunt group who then befriend her. Indebted to the team, the former villain asks them to help fake his death at a public banquet so that his family can live the rest of their life in peace. The plan backfires though when his traitorous underling (Wei) decides to betray his boss and take control of the organisation himself. After kidnapping the supposedly deceased kingpin, the superfighting betrayer sets his sights on wiping out the stuntmen to seal his plan for domination.

The rather excellent ‘F/X: Murder By Illusion’ may be the inspiration for this work, but it’s ultimately as far removed from the insanity on offer here as can be imagined. Whether it is the ingenuity of the action sequences or the utterly bewildering ‘comedy’ that breaks out of the borrowed narrative like a festering boil, ‘A Heroic Fight’ is a memorable experience. Bathed in oodles of slightly embarrassing 80s kitsch, this is a Curate’s Egg of a film that very kindly throws a bucket of hot urine over you before you get too captivated by the Yuen Clan’s remarkable physicality.

‘A Heroic Fight’ provides undemanding entertainment and, for those who have battled past some of the attempts to amuse orchestrated by the director, has a closing thirty minutes of relentless fight sequences stitched together with exquisite precision. For anyone who wants a blast of what exceptional imaginations used to do with minor budgets, ‘A Heroic Fight’ will refresh more than it will befuddle.