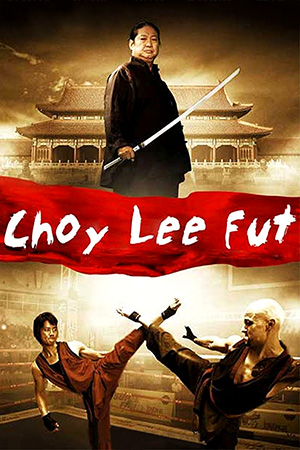 After a run-in with thugs in London, Wei Yip (Sammy Hung) decides to travel back to his home in China and resume his study of martial arts at his uncle Chen’s school. Taking along best friend Takeda (Kosugi), Wei prepares to learn Choy Lee Fut from the oddball relative (Yuen Wah). Their practice is accelerated when a rival school – supported by a powerful media firm – challenges the Chen school to a winner-takes-all showdown to be beamed across the world.

‘Choy Lee Fut’ opens in Germany, oh sorry ‘Thames Town London’ – a hilarious substitute for the capital that exists in the same plane of reality as Dick Van Dyke’s chimneysweep. Full of mock-Bavarian architecture, this supremely stupid location filming (actually ‘Thames Town’ in Songjiang) just needs a couple of frauleins carrying tankards of beer during Oktoberfest to get the real English atmosphere it craves.

This unintentionally hilarious beginning sets the perfect tone for what is a particularly inept genre piece. ‘Choy Lee Fut’ then goes on to provide all of the pre-requisites for popular modern Chinese cinema: a ubiquitous – not to mention annoying – Mandorap soundtrack that deluges every scene of action with the discretion of an avalanche; fawning shots of glistening buildings and futuristic technology in Beijing (or sometimes Shanghai); weak romantic sub-plot that veers into pathos without setting any foundations for us to care; grating humour…the list goes on. In a desperate desire to offer populist films to China, local producers seem to be happy aping everyone else’s style (badly) rather than find their own way of fusing the elements together. Perhaps this is the first immature phase in a nascent popular cinema. More worryingly, perhaps not.

Rant aside, ‘Choy Lee Fut’ provides painful reminders of a glorious past by providing Sammo Hung and Yuen Wah with roles in the film. Both actors manfully stride through the mess, but neither will want this etched into their Cvs. There is a few passable action sequences – the opening fight between our heroes and the ‘English’ hooligans – but nothing to compensate for everything else around. Even the action becomes monotonous by the time the tournament begins and there’s probably as much genuine Choy Lee Fut on display as there was in ‘Pretty Woman’.