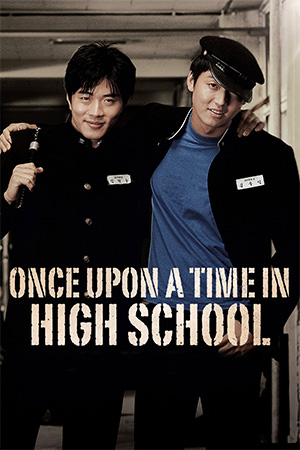 When his family moves home to the Gangnam area of Seoul, shy and introverted Hyun-Soo (Kwon Sang-woo) is forced to transfer to the notorious, militaristic Jungmoon High School, where violent bullying is rife and severe corporal punishment is meted out for even minor misdemeanours. There he makes friends with the charismatic Woo-sik (Lee Jung-jin), the school’s most skilled fighter and develops a crush on Eun-ju (Han Ga-in), a girl from a different school who rides on the same bus. Away from school, Hyun-soo spends his time idolising Bruce Lee and practising tae kwon do at his father’s gym. As Hyun-soo struggles to develop his relationship with Eun-ju, the violence among students and teachers, at Jungmoon,  is escalating and the only way for Hyun-soo and Woo-sik to survive is to take a stand against those responsible.

Since the 1970’s, Bruce Lee has been a hero to millions of people. As well as being a gifted martial artist and an icon of cool, in his films he often played characters who stood up to oppressors and bullies. This made him someone the downtrodden and the bullied idolised and were inspired by. Bruce Lee references appear throughout Ha Yu’s semi-autobiographical tale of 1970’s high school life. At the beginning of the movie we see a young Hyun-soo thrilled as he watches Fist of Fury. Later we see him  mimicking Bruce and enacting scenes from his films with his class mates, reading a Jeet Kune Do instructional book and even practising with nunchaku. These are minor details and the real Lee influence appears in the films final fight sequence but I’ll come back to that later.

The film is a pretty simple story of a young man’s school days. Hyun-soo is a shy and awkward boy who makes friendships, falls in love and does most of the things a teenage boy does while trying to cope with the institutionalised violence from teachers, the army staff (who dispense the more brutal punishments) and violence from fellow students. It’s a system where beatings are passed down from the strongest and most powerful to the weakest and seems to show how violence only leads to violence.

As Hyun-soo’s relationships grow his character begins to open up and allows the audience to really start to connect with him. Kwon Sang-woo carries the film very well. He’s endearing, not overly melodramatic and thoroughly believable as the lonely new boy and later the angry young man who’s ready to fight. The romance elements of the film aren’t predictable and mostly veer away from melodrama. It’s sweet, touching and carries an honesty that runs through the all parts of the film. The performances, from a solid cast, and the writing are believable and will likely strike a chord with anyone who’s experienced bullying, unrequited love and fragile, childhood friendships (which will most likely be everyone).

The believability also extends to the action scenes. They aren’t slick and neat affairs that you may be used to from Hong Kong films. They’re frenetic brawls with occasional moments of well executed tae kwon do kicks and punches. The rawness of the fights make them gripping and very exciting to watch. Hyun-soo is, towards the end of the film, seething with frustration and anger towards the bullies that erupts in blistering style and this is where the Bruce Lee influence is felt the most strongly. It’s reminiscent, emotionally rather than stylistically, of Bruce’s assault on the Japanese dojo in Fist of Fury. Filled with a Lee-like righteous anger, Hyun-soo makes a stand and takes on the bullies in a heart pounding, brutal and thrilling finale that any action fan will enjoy.

This is a well acted and written coming-of-age drama with some intense fight scenes. An absorbing and thoroughly enjoyable movie.