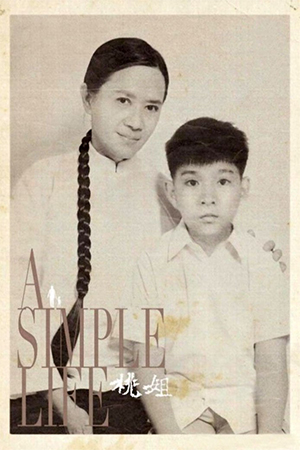 The fascinating story of producer Roger Lee’s relationship with his family’s maid is brought majestically to the big screen by Ann Hui, one of Hong Kong’s most insightful directors. Together with two outstanding performances and a host of familiar supporting players (not to mention cameos from Sammo Hung and Tsui Hark among others), ‘A Simple Life’ is the perfect marriage of arthouse style and heart-rending substance.

The focus of the film is the later years of Roger Lee’s (Lau) maid Tao (Ip) and the changing dynamic between them. Practically raised by her as a child, Lee now has to turn to carer as Tao suffers a debilitating stroke and feels her health compromising her role as head of the house. Yet the relationship between her and the Lee family goes far beyond just a professional one and Roger pays for his beloved friend to stay in a residential home. Despite being a successful producer and having to spend extended weeks away from Hong Kong, he continues to visit her and make sure all her financial commitments are met. Meanwhile Tao begins to make friends among the denizens of the home and finds new purpose beyond the life of a maid, one which she had fulfilled for nearly all of her life.

Deanie Ip gives one of the best performances by any actor this decade. Infusing Tao with stubbornness, determination and vulnerability, Ip gives one of those humbly realistic portrayals of ordinary people that avoids caricature and thespian tricks. Instead of grandstand dramatics she uses a subtly raised eyebrow or a sublimely delivered line to convey the depth real people have, a depth rarely shown by even the most naturalistic films.

Yet ‘A Simple Life’ is much more than just a brilliant central performance. Anyone who appreciates Ann Hui’s canon will know that she is one of the great naturalist film-makers, a director with an appreciation of what lesser visionaries would consider the mundane. ‘A Simple Life’ is probably her best work since ‘Summer Snow’ and may be the one that gets her the wider appreciation her talent demands. Effusive praise perhaps, but not without grounds.

Ultimately ‘A Simple Life’ is a wonderful drama that makes incisive comments on its subject without evolving into an awkward polemic. Deanie Ip is exceptional, Andy Lau has rarely been better and Ann Hui has pieced together a work of immense power.