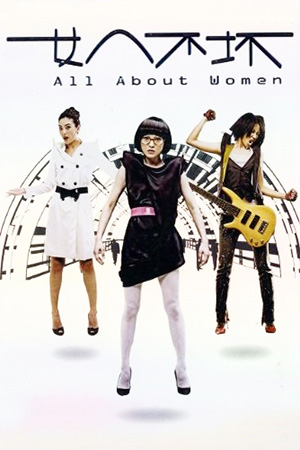 With John Woo recently regaining some of his artistic credibility with the ‘Red Cliff’ films, it would be so encouraging to report that Tsui Hark is also back to at least a feint impression of his former self. The man who has given Hong Kong cinema some of its greatest works – the first two ‘Once Upon A Time In China’ films, ‘Peking Opera Blues’ and ‘Zu: Warriors Of The Magic Mountain’ to mention a few – needs something to inform contemporary audiences that he still has something to offer. ‘All About Women’ will not be the movie to achieve this. It may be the film to alienate a legion more of his veteran fans though.

The Beijing-set story focuses on three very different women: Fanfan is a dowdy research scientist looking for love and not having much success; Tie Lung is part-wannabe boxer, part-rock star who idolises the country’s biggest singing star; Tang Lu is the goregeous executive who leaves a wake of drooling men everywhere she walks. This trio is destined to play a significant part in each others’ lives as Fanfan discovers a powerful pheromone that makes her irresistible to the opposite sex, while Tie Lung and Tang Lu become involved in the aftermath of the creation.

Hushed rumours of a modern ‘Peking Opera Blues’ reworking were heard when ‘All About Women’ was announced, a wonderfully exuberant ride with strong female leads and that intoxicating Tsui Hark magic we were sorely missing. Unfortunately this 2008 effort shouldn’t be uttered in the same sentence as Hark’s seminal masterpiece let alone viewed along side it – watch ‘Black Mask 2’ before this to get the very best out of it. As the man behind the lens remains someone I will always associate with the fabled ‘Golden Age’ of Hong Kong cinema, the previous sentence was particularly unpleasant to write.

To its credit, ‘All About Women’ starts with a colour and verve, cramming more exposition in the first five minutes than demanded from ten similar films. Each of our three heroines gets a similarly energetic introduction and creates an air of anticipation for what should follow. After a whole two hours of tedium and hysterical women trying to destroy the speakers on your home theatre kit, only a valium is likely to take the edge off the sheer disappointment felt. And it is apparent that Tsui Hark no longer has the will power to end the film as it staggers through one anti-climax after the other, desperately seeking a crescendo and constantly failing.

Normally a deficent storyline can at least be partially redeemed by well-written characters, but ‘All About Women’ is as lax here as anywhere else. Each of the main protagonists start out larger-than-life yet never develop beyond their flashy introductions. Their trials and tribulations become difficult to care about with Tang Lu being a noticeably uninvolving part of the triumvirate. ‘All About Women’ is hard work, something I never thought I’d be writing about a Tsui Hark film. The only reassurance is that his latent talent will have to erupt forth soon – at least that’s what I say as I cry myself to sleep.