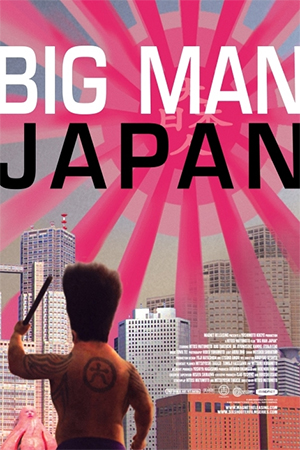 Possible cult classic in the making (I hate to brand a film with that label straight off the bat but this flick just screams midnight movie status: the kind of film alternative cinema lovers will lap up for its over abundance of kookiness and subverting the norm), ‘Big Man Japan’ takes Japan’s love of big, crazy monster movies and spins it into a yarn of a lonely man just trying to get on with his life: albeit taking time out to battle huge creatures that threaten the cities of Japan. Poor Masaru Daisato (Matsumoto) really just wants to be left alone and hopefully fix the estranged relationships he has with his ex-wife and daughter. But no such luck, as he is also Japan’s last superhero, Big Man Japan: a man, who once charged with immense amounts of electricity, grows to giant size to ward off marauding monsters. With a documentary film crew in tow, we follow Masaru Daisato about his daily life as he cooks, shops, attempts to see his daughter, rides around on his scooter, deals with his obnoxious and money hungry agent and, oh yeah, goes into battle with an ever increasing array of weird monsters.

Walking a very fine line between being a little too alternative for its own good and feverishly fun, creative and really like nothing you have seen before, ‘Big Man Japan’ is big on ambition, heart and monsters. Writer/director/star Matsumoto takes in everything from Japanese monster movies, to the loneliness of modern Japanese society, to hero idolization and to the fact the everyone from the documentary crew and Masaru Daisato’s agent are trying to cash in on him. The film is sort of a kookier, Japanese version of ‘The Incredibles’: albeit in a much more adult and catering to lovers of alternative cinema kind of way. The film has two tones really: the low key documentary style scenes that explore the human side of ‘Big Man Japan’ and the big monster bashes which are realized through some very striking and almost hallucinatory CGI effects. Surprisingly the two tones/styles work well together, giving ‘Big Man Japan’ it’s weirdly, offbeat and often quite funny nature. Matsumoto juggles all the kookiness well but can’t help but slip into the “trying a little too hard” at being offbeat and strange camp. The film is sometimes a little too laid back and dead pan in some scenes, especially the documentary filmed section, creating a feeling that the film is attempting just that little bit much to cater to the alternative.

But having said that, Matsumoto brings a lot heart to all the quirk. While the concept is outlandish the emotions often aren’t as we see the life Masaru Daisato has to live is taking its toll on him and those in his life: a lonely superhero trying to protect a country and its people who really don’t seem to care much about him. He’s a jobbing superhero, just trying to make ends meet as there is nothing much else he can do but grow giant and fight monsters. The monster fight scenes are worth seeing the film for alone: surreal, funny and featuring an assortment of strange monsters that include The Strangling Monster (complete with comedy comb over!), The Leaping Monster, Evil Stare Monster (probably the best one), The Stink Monster, The Child Monster and one very evil looking giant Red Demon Monster. Utilising CGI effectively, creatively and rather strangely, you may find yourself blinking several times just to make sure what you are seeing, is what you are seeing.

A bit like a Japanese Spike Jonze video featuring monsters and documentary style photography, ‘Big Man Japan’ isn’t always quite as quirky and clever as it thinks it is but is nevertheless another entertaining example of why Japanese cinema is at the forefront of the unique and creative. Plus the gag about ‘Big Man Japan’s giant purple, Incredible Hulk homaging pants is priceless.