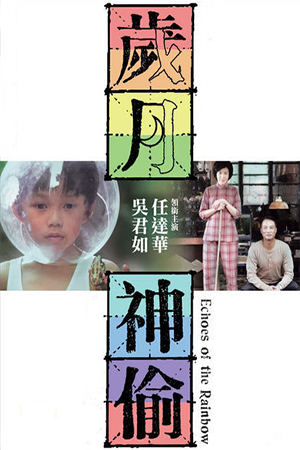 Alex Law adds to his very occasional directorial credits with ‘Echoes Of The Rainbow’, a semi-autobiographical look at a boy growing up in 1960s Hong Kong. For such a personal look at the past, acclaimed scribe Law is unsurprisingly behind the screenplay and infuses it with a nostalgia greatly appreciated by local audiences on its release.

‘Big Ears’ Jin-Er (Chung) leads a simple, yet essentially happy life in Sheung Wan with his cobbler father (Yam), loquacious mother (Ng) and older brother Jin-Yi (Lee) whom he idolises. The youngster dreams of being an astronaut, marrying Petrina Fung and emulating his sibling’s academic and athletic success. His parents have their own pressures with the shoemaking stall as it faces extortion from the local beat policeman, increasing competition and the violent typhoons that trouble Hong Kong.

As a director, Alex Law was responsible for ‘Painted Faces’ – the acclaimed film about a Peking Opera Troupe that was set during a similar period to this latest production. ‘Echoes Of The Rainbow’ is a more personal account, borrowing heavily from Law’s experiences growing up in an ever-changing Hong Kong. Once again the detail of his work behind the lens means that the period detail will strike a perfect chord with Hong Kong audiences while those outside will never quite feel the resonance.

For the latter group, ‘Echoes Of The Rainbow’ is still an affecting work that, while never especially surprising, gives an interesting insight into coming-of-age in a society delicately balanced between Western and Eastern influences. Law offers a few subtle critiques of the British rule, mostly through the unpleasant character of Inspector Brian who happily uses his powers to squeeze money from the locals while also telling the Jin children of their culture’s shortcomings. Again, this probably doesn’t tell most viewers something they don’t know, but it adds an important layer to the traditional drama.

Alex Law invests much into his two inexperienced leads and such bravery pays off handsomely. Surrounded by strong actors such as Yam and Ng, Buzz Chung and Aarif Lee handle all of their big emotional transitions successfully. This key component allows the film to become believable and affecting even when stepping into sentimentality. ‘Echoes Of The Rainbow’ is full of the balancing act between cliché and skilled drama, complete with solid performances throughout.