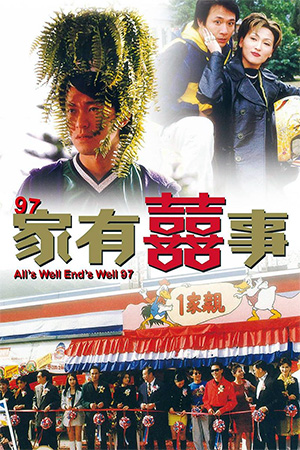 It seems to be widely thought that the first ‘All’s Well, Ends Well’ was some kind of comedy classic. I was far from impressed though and found it to be full of tired comedy and unoriginal skits. Nevertheless, it proved to be a massive hit at the box-office and therefore spawned two ‘in-name-only’ sequels. ‘All’s Well, Ends Well 97’ was the second sequel and gave Cantonese comic kingpin Chow Sing Chi the chance to play a very similar character to his appearance in the original.

The wealthy father of an extended family is planning to expand his lucrative restaurant empire into across Hong Kong. He is faced with a continual struggle, though, as his three sons – particularly the two youngest – become the cause of constant frustration and angst. The eldest son (Raymond Wong) is committed to the family business, but constantly neglects his dowdy, yet loving wife (Christine Ng) – something which gradually dawns on her over time. The next son (Francis Ng) is so obsessed with education that he is now the oldest student in the entire university. The most awkward, however, is the lazy, aimless youngest son Kung (Chow Sing Chi) who spends his time spending his family’s money and doing as little as possible. After viewing their brother’s complete lack of interest in work, the two older brothers play a crual trick on Kung: they pretend he has won the Hong Kong lottery and is rich beyond his wildest dreams. Kung is used to frivolous spending, but now he throws his money around without a care and never realises the trick that’s been played on him. When the truth emerges, Kung is faced with vast debts and decides to feign insanity to excuse himself from them. As the family now dote around him, each brother gradually learns the value of the family and also finds true love.

Chinese New Year comedy films aren’t renowned for their depth and ‘All’s Well, Ends Well 97’ doesn’t attempt to change this unenviable tradition. As with the less than hilarious original, this 97 update throws spoofs, in-jokes, and lashings of over-the-top ‘comedy’ into a confusing blend. While Chow Sing Chi is usually entertaining, here he plays his typically arrogant character without ever gaining the viewer’s interest; the standard plot is for Chow’s arrogance to be pacified later on in the film, but this common twist is unconvincingly tacked on the end here.

‘All’s Well, Ends Well 97’ stands out thanks to a once-in-a-lifetime cast that features the aforementioned Chow, a very unexpected looking Francis Ng and adored actress Christy Chung. Naturally, even a cast as first-rate as this is certainly no reason to watch the film – there are too many flaws that cannot be forgiven. It was a box-office smash on its release, but ‘All’s Well, Ends Well 97’ is mostly a tired time-waster that struggles to raise even a sympathetic smile. Chow Sing Chi completists may want to seek it out, but everyone else should divert their attention to his many more accomplished films.