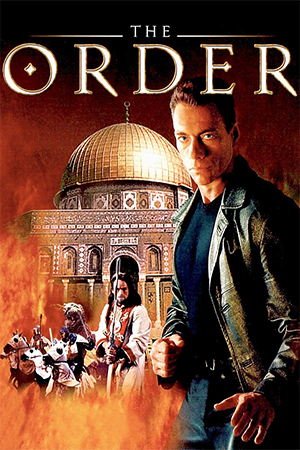 After recent forays into other genres, Jean-Claude Van Damme gets back to his action roots for ‘The Order’. This is to take nothing away from solid outings such as ‘Replicant’, but being a child of the 80s I have always favoured his old school action efforts. However, is ‘The Order’ a welcome return to form or is Van Damme past his sell-by date?

It is said that during the Crusades a single knight grew weary of the violence that plagued his lifestyle and chose to create his own Order of peace loving individuals that could live alongside each other in harmony.  As the generations passed, The Order remained and to this day a sect lies deep in the heart of Israel with hundreds of followers to its name.  When an ancient map indicating the whereabouts of the treasure of The Order falls into the hands of a Professor, he suddenly becomes an extremely sort after man.  So sort after in fact that he disappears completely whilst in Israel, much to the dismay of his son Rudy (Van Damme).  Rudy hops aboard the first flight and starts upsetting the locals with his questions. But Rudy will stop at nothing to get his father back, even if it means letting his fists and feet do the talking.

If you’re familiar with action movies in any way, you’ll no doubt find ‘The Order’ fairly familiar territory. Clearly inspired by the likes of Indiana Jones, the film has a very adventure-y feeling to it as we watch Van Damme jet around exotic locales beating up bad guys. As you might expect, this means that the story isn’t exactly Shakespeare but it is a fairly fun ride that is enjoyable enough while it lasts. It also helps that the film goes with a light-hearted approach, with plenty of comedic moments mixed in amongst the action. In fact, you could easily say that the film has a very Jackie Chan-esque style and there’s certainly a hint of ‘Armour Of God’ about the production.

Although I’ve always been a fan of Van Damme, the action scenes in his recent movies have certainly started to slip. Thankfully though, Sheldon Lettich is a director who is often capable of getting the best out of Van Damme (see ‘Double Impact’ and ‘Lionheart’) and that is certainly the case with ‘The Order’. While none of the fights are likely to go down in cinema history, they are all fairly clean and simple with a limit placed on Van Damme’s trademark manoeuvres.  The finale in particular, is suitably pleasing as Van Damme battles it out with his opponent using only his feet.  There’s also a strong 80’s influence throughout as our hero fails to lose a single fight and storms his way through each combatant with ease.

‘The Order’ is a welcome step backwards for Van Damme that will undoubtedly prove popular with fans of his earlier outings.  At the same time though, it is still some distance from the quality of movies that launched his career and is really only a fun footnote at best.