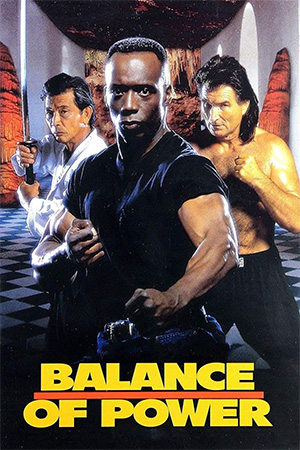 Before he left the world of movies to find success and fortune with Tai Bo, Billy Blanks was a leading man in many a 90s martial arts action flick. He made a mark as the bad guy in the great ‘King of the Kickboxers’ and led the charge in VHS hits such as ‘Talons of the Eagle’, ‘Back in Action’ and perhaps the best ‘The Karate Kid’ clone, ‘Showdown’. ‘Balance of Power’ (or ‘Hidden Tiger’ as it’s known here in the UK!) would be one of his last lead roles and as such is like a checklist of late 80s to late 90s straight-to-video American martial arts films. Likeable hero who runs a dojo: check. Youngster he takes under his wing as a surrogate son/daughter: check. A wisely old kung fu master he must train with in order to defeat the big bad: check. Multiple training montages: check. And a fight-to-the-death tournament he must enter and win in order to settle the score: check. Throw in the de-rigour English bad guy of the time, genre stalwart James Lew as an evil fighter, and even a bit of ‘Indiana Jones’ style escapades and you’ve got the epitome of 90s straight-to-video action all wrapped up in a tight 85-minute package.

While rarely breaking the mould, and Blanks has certainly made better action flicks, ‘Balance of Power’ is a fast and fun little programmer that gets by on the likability of its star and the pairing of him with the always great Mako. They’re a pleasant duo, have good chemistry and it’s always fun to see Blanks flex his muscles and cut loose in some fight scenes. A gifted fighter, he appears to be at the top of his fitness game here and propels through a serious of entertaining and creative training sequences (the type of which every fight film of the time had to feature!) showcasing what a specimen he is. Blanks also gets some nifty fight scenes, certainly in the ‘Bloodsport’ tournament style second half of the flick, and while they’re not the most intricate choreography wise, they’re certainly energetic and his final fight with Lew is impressive.

It’s all very silly, cliched and wobbly of acting but it comes from a more earnest and seemingly less critical time, and ‘Balance of Power’ rockets along on charm, plenty of training/fight action, and a welcome sense of nostalgia when these types of flicks were a dime a dozen and all you needed was a likeable star, a fight tournament, and plenty of fight-action to be entertained.