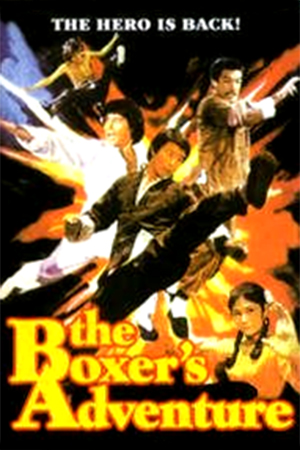 The most memorable and talked about kung fu movies from the 70s are littered with exciting fight scenes and enigmatic leading performances.  Having heard little or nothing about ‘Boxer’s Adventure’, I assumed that it would be just another cheap chop socky clone. Thankfully, I was soon to be proven wrong…

When the evil Yun Shi Kai threatens to take control of the local province, the royal minister realises that he must build an army to defeat him.  He travels to Tiger village where he enlists the help of three of their finest fighters to aid him in his quest.  They are teamed with Captain Lee (Tan Tao Liang) and sent out in advance to prepare the villages for the minister’s arrival.  Along the way they encounter ambushes, romantic interludes and devious plots that all threaten to stop them from completing their duties.

My main reason for picking up ‘Boxer’s Adventure’ was the presence of Tan Tao Liang, a martial artist and actor who left a great impression on me after appearances in films such as ‘The Hot, The Cool And The Vicious’ and ‘Flash Legs’.  Aside from being quite a strong leading man, Liang’s kicking skills are absolutely astounding and he is somehow able to use his legs like most people would use their fists. Thankfully, ‘Boxer’s Adventure’ takes great advantage of his abilities and Liang puts in a fine performance that allows him to churn out numerous examples of his gravity defying bootwork.  He is also ably accompanied by a few of the lesser known kung fu stars (including a young Blacky Ko) who, despite lacking real screen presence here, do possess natural abilities in the martial arts.

Unfortunately, ‘Boxer’s Adventure’ doesn’t fair quite so well when it comes to story and suffers from the typical low budget restrictions that plagued a lot of productions from this era.  This is not to say that it is bad per se, but it does drag a little at times and the plot is really one that has been played out a million times in other kung fu movies. To make matters worse, the choppy editing often causes scenes to clumsily jump into one another, occasionally making it difficult to follow the story and decipher the reasoning behind our heroes’ actions. That said though, it’s certainly far from the worst and easily provides enough backing to link together the fight scenes.

Overall, ‘Boxer’s Adventure’ is another entertaining kung fu film from the 70s that delivers some outstanding action scenes. If you are a fan of the genre then this is an ideal choice to fill the gaps in your collection.