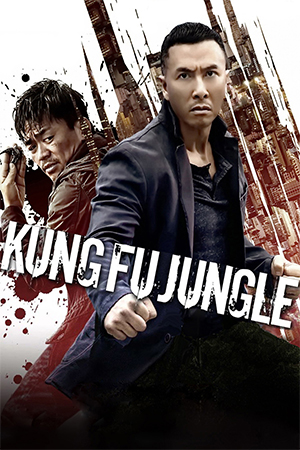 Donnie Yen’s second modern police actioner in as many years (after the much maligned but underappreciated ‘Special ID’) and after a surfeit of ‘Ip Man’s, ‘Iceman’s, ‘Lost Blademan’s and various other historical action films (ok, so ‘Iceman’ is partly set in present day as well), ‘Kung Fu Killer’ see Yen and director Teddy Chen on fine fight form. The two previously made the excellent ‘Bodyguards and Assassins’ and this re-team sees Yen as a shamed police martial arts instructor, Hahou Mo, doing time for killing an opponent: it seems he has trouble keeping his rage under control once his fists start flying. However, Detective Luk (Yeung) reluctantly springs him from the big house when her and her team need his help in catching notorious killer Fung Yu-Sau (Wong).  Fung is targeting renowned kung fu masters, killing them one by one (having perfected their styles) in an effort to become the best fighter of all. It would also appear Hahou Mo is also on the list of targets and may be the only fighter strong enough to stop Fung from completing his killing streak.

While the above sounds like a rather streamlined plot, and to a degree it is (but with a concept like that you don’t need lots of subplots etc getting in the way!), ‘Kung Fu Killer’ is surprisingly character rich as well as being a rip-roaring martial arts film. Yen, while certainly getting in on the fight action, stretches dramatic chops here as well as the action ones as his character struggles to come to terms with his own violent demons all the while attempting to protect those he loves who may be in danger from Fung. His rocky relationship with Charlie Yeung’s (‘Bangkok Dangerous’, ‘Seven Swords’) stern detective is also nicely handled, the two sharing good chemistry, though a few more scenes between the two would have been a welcome addition. However, the star of the show is undoubtedly Wang Baoqiang (‘Assembly’, ‘Iceman’), his full force performance making him one of Hong Kong cinema’s most memorable recent villains. A damaged and deluded soul that has gone off the deep end, Wang Baoqiang’s unhinged villain may not be much to look at but is an unstoppable force in all forms of kung fu.

Getting to fight a relative who’s-who of Hong Kong action cinema, Wang Baoqiang cuts loose in a succession of increasingly inventive fights that take place in and on top off a giant skeleton sculpture (!), a tattoo parlour and in once scene of mega meta martial arts, on the set of a currently shooting kung fu movie. Highly inventive and full of hard hitting impact, the fights (part overseen by Yen and the likes of action guru Wei Tung) are gloriously choreographed and climax in an epic brawl on a busy highway that sees Yen and Wang go toe-to-toe in an impressive array of martial arts combat: and not even a misjudged bit of dodgy CGI can dampen its fist pumping awesomeness.

Couple the barnstorming action with an intriguing story and a non-stop cameo spotting onslaught of famous Hong Kong stars (from both in front and behind the camera), ‘Kung Fu Killer’, despite its B-movie title and the odd moment of cheesiness, comes very close to bringing back the elation one felt when watching golden era Hong Kong action cinema. Slick entertainment done right.