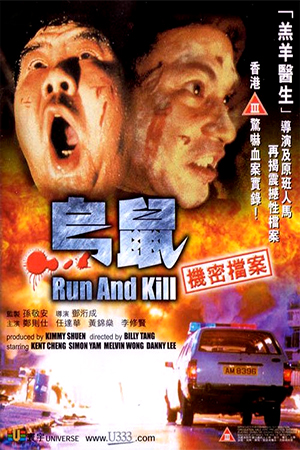 Cheung’s (Cheng) life seems like a relatively normal one; working hard all day and coming home to his family at night. Behind the facade though, it’s clear to everyone but Cheung that his wife is just using him for his money. When he comes home from work one day to find his wife in the arms of another, Cheung heads to the nearest bar to crawl inside a bottle of tequila. Whilst under the influence he begins to recount his woes to a man who claims he can “fix” any problem. With the alcohol doing the talking, Cheung agrees to anything and the next day his wife is brutally murdered. Bemused and bewildered, Cheung is about to find out that he owes a serious debt to the worst people possible and they are coming to collect…

A quick glance at the synopsis might lead you to believe that ‘Run And Kill’ is a fairly routine revenge saga. However, this being a Hong Kong Category III flick it isn’t long before the normality evaporates and the craziness kicks in. Director Billy Tang (‘Dr. Lamb’) weaves out an horrific tale that shows just how one man’s life can be turned on its head by a single mistake. It’s this “cause and effect” style of storytelling that really makes ‘Run And Kill’ so exhilarating, as Tang keeps Cheung’s predicaments on a constant downward spiral. It seems that no matter how hard he tries, things only seem to get worse and he digs his hole deeper and deeper. In amongst this madness, Tang also throws in some blood-curdling gore and an uncomfortable surprise or two that really help to keep the audience on their toes. It’s perhaps not film-making at its most artistic, but this really is one hell of a riveting ride.

Kent Cheng in the leading role for ‘Run And Kill’ is also a pretty genius piece of casting. Cheng is not a physical superman or an Adonis, he’s just a happy-go-lucky guy who could quite easily be the man next door. This makes his part in the story so much more believable and you really do feel for him throughout.  His opposite number here is played by Simon Yam who is always a pleasure to watch.  However, Yam seems to be at his best when he is playing crazy, and he certainly does that here. Danny Lee also pops up from time to time as the stereotypical police officer but his role is so peripheral that he doesn’t really seem worth worrying about.

‘Run And Kill’ may not be to everyone’s taste, simply because it’s not always the most pleasant experience and the low budget is evident throughout.  However, the sheer energy and pacing of the film is undeniably invigorating and it is truly captivating to watch poor, unsuspecting Cheung fighting for his life.