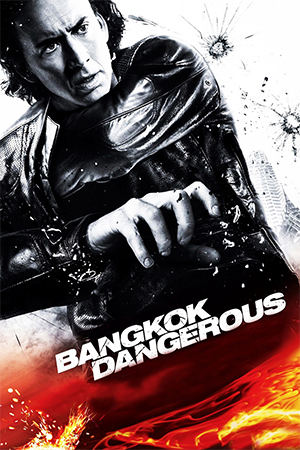 The original ‘Bangkok Dangerous’, released in 1999 and also directed by the Pang Brothers, was no great shakes. Style over substance and too much mawkish melodrama rendered the film sluggish and over reaching in its ambitions to be taken seriously. But it made enough of a splash to get the Pang Brothers noticed (who’ve certainly gone on to make better films: ‘The Eye’, ‘Re-Cycle’) and had enough of a cult following to get the remake machine interested. This lacklustre and also very sluggish remake, comes from Nicholas Cage and the Pang Brothers once again and offers nothing new to say and pretty much suffers from the same problems as the original.

Cage plays Joe an expert hitman holed up in Bangkok with a number of people on his list to assassinate. Living a lonely existence, he has become adept and ruthless at his profession living by a certain code so the job always gets done. However, after a lifetime of killing he eventually begins to soften when he allows himself to form a friendship with his local contact, Kong (Yamnarm) and falls for a deaf pharmacist, Fon (Yeung) who aids him with one of his injuries. But, inevitably, his two worlds collide meaning he must choose between the life of a lone assassin and that of someone normal.

A cliché riddled trudge, ‘Bangkok Dangerous’ offers nothing new to say and apart from a refreshingly downbeat ending is pretty much hampered with predictability from the get go. The relationship Joe has with Fon is barely developed beyond standard schmaltz and the life of an assassin is expressed with a dreary voiceover and routine and boring missions. Joe’s friendship with Kong livens things up a little but this is mainly down to Yamnarm’s enthusiastic performance. To be fair the acting isn’t all that bad. Yeung (‘Seven Swords’) is particularly good as the deaf love interest but is given little to do, the bad guys are nastily realized and Cage isn’t all that bad. It’s just, much like the original, the film drags: never really exciting as an action picture or engaging as a drama. Despite a splurge of action towards the end, the action scenes are hardly inspiring and as routine as anything else in the flick.

It seems the star and director perhaps had enthusiasm to revisit the story of the original but by the time they got round to it, all interest had vanished. One feels watching that despite some scenes working quite well (Joe and Fon having dinner for the first time, Kong training with Joe) the makers and star were contractually obliged to make the film so it got made as quickly as it could. A distinctly average affair and perhaps also the first time I can’t recommend you go watch the Eastern original instead.